Saurik has released Cydia 1.1.28 and enabled tweak purchases for users jailbroken on iOS 10.2.

● Cydia Now Users APT 1.14~b
This is a major update to the core package management logic used by Cydia. This library, which is shared with Linux distributions such as Debian and Ubuntu, is an industry standard, which Cydia has been excited to share. For purposes of performance and reliability, Cydia had a number of patches to the (rather old) copy of APT it had been using. It turns out APT's upstream has been paying attention, and was excited to have us update.

The big thing to know about this change is that there are a handful of repositories that are simply broken, and older versions of Cydia failed to notice. We've had this build of Cydia in a "public beta" now for an entire month, which has been a lot of time to get the more important of these to fix their corrupt metadata files. However, you may still run into warnings: you should remove the repositories which are broken, and it is not a bug in Cydia that you see warnings.

● Cydia is Now a 64-bit Process
Cydia is now compiled for ARM64. While this offers Cydia very little direct advantages (and probably comes at a performance penalty), this avoids a misleading dialog box from Apple and also happened to work around an issue on iOS 10 where no links in Cydia could be clicked. Note that this means that any extensions installed to modify Cydia will now need to be recompiled for 64-bit as well.

● Support for iOS 10
There are at least a handful of users using iOS 10 due to the new Yalu jailbreak: this version of Cydia has a couple minor modifications to make this work better for them. For those worried about Cydia on older systems: the vast majority of users are using iOS 7, 8, and 9 (in nearly equal percentages), and Cydia continues to support even older versions of iOS, so do not feel concerned about updating (I still haven't updated from my iOS 8.4 primary phone).

● Some Random Bug Fixes
iAdam1n reported an issue where removing a repository could cause Cydia to not provide a UI to return to the previous screen. Find Extensions for Applications was broken for a few releases, but has now been fixed. Due to the new Yalu jailbreak shipping with SSH, some long-standing "right after jailbreak" bugs were able to be understood and fixed, making Cydia less likely to fail right after installation.

You can find updated tutorials on how to jailbreak below... 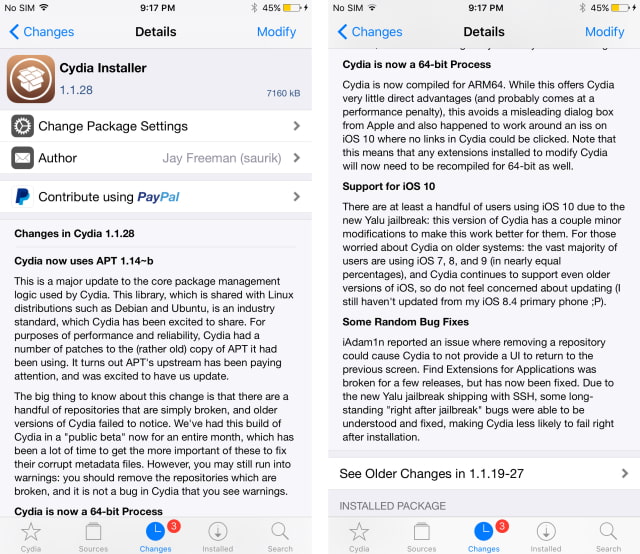