This beta version of iOS 10.3 contains bug fixes and improvements.

iCloud Backup
Nightly backups should no longer fail with the error message “Some files were unavailable
during the last backup.”

Managed and Shared Devices
• On managed devices, users should no longer be able to override the current iCloud Document Sync setting.
• Shared iPad settings should now work as expected.

Developers can download the iOS 10.3 beta 4 firmware from the link below... 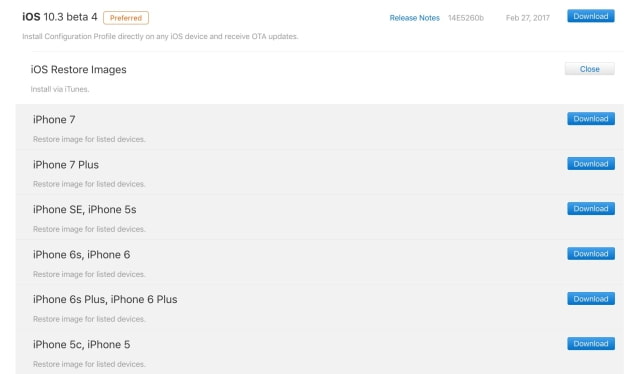 Edwin - February 28, 2017 at 3:22am
In IOS beta 2 & 3 apple decide to add the most annoying "ad" campaign in the the whole IOS history. The think is I only have the 5gb free icloud storage and since I have the 256gb iphone is the storage is obvious almost full, but I made my backups in my mac so I don't need it. And since beta 2 it keep me warning every time that its almost full and that I should buy extra space... every time I said NO it keep on "warning" the same stuff... Please APPLE stop that. Could someone at Clarified make a post on this? So ma be apple reconsidere this on the next beta? I have all the screen shots if you need it. Excuse my english is my second language. Thanks.
Reply · Like · Mark as Spam
0