John Fenwick, who led Google's spacecraft operations, and Michael Trela, head of satellite engineering have left the company for a new hardware team at Apple which reports to Greg Duffy, co-founder of Dropcam.

Fenwick co-founded Skybox Imaging in 2009 while Trela joined soon after as the company's first outside hire, according to their LinkedIn profiles. Skybox produced satellites about the size of a refrigerator, equipped to take detailed, near-constant images of the earth's surface. Prior to entering the startup world, Fenwick served in the U.S. Air Force and Trela was a spacecraft engineer at John Hopkins University.

It's speculated that Apple could be looking to expand into satellite design and operation. One use for such technology would be a broadband service that could reach users who don't currently have Internet connectivity. It's also speculated that the executives could be working on a system to help Apple better collect mapping data, perhaps via the use of drones.

Notably, rumors have suggested that Apple may be funding Boeing's V-band development work. Boeing has proposed a constellation of between 1,396 and 2,956 V-band satellites in 35-74 orbital planes at 1,200 km in altitude. The endeavor would create a global broadband system that would provide a wide range of advanced telecommunications services for commercial and governmental users. 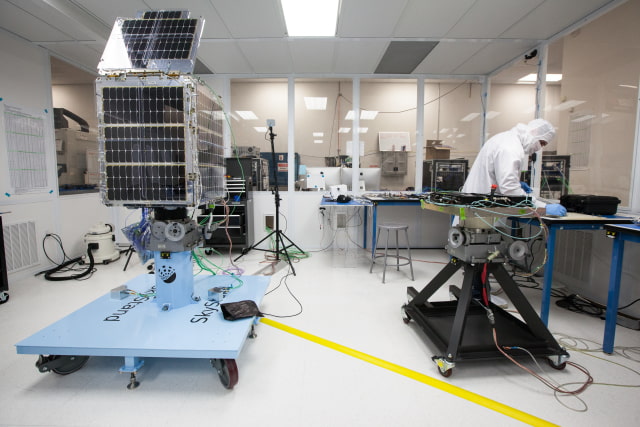 Kk - April 22, 2017 at 4:15am
They will regret it because Apple doesn't want to innovate anymore. Maybe they hired them to make emojis at space
Reply · Like · Mark as Spam

ratGT. - April 22, 2017 at 8:25am
@Kk - You are neither funny nor do you contribute with anything useful. Therefore go off to your f@gdroid website and go suck on that galaxy dild0 of yours as much as you want and let the grown-ups do the commenting-thingy around here
Reply · Like · Mark as Spam