The Electra Jailbreak of iOS 11.3.1 is now open source and available on GitHub.

---
"We have had several problems with pwn20wnd and have decided to remove him from the Electra team due to his recent behavior. I have caught wind that he was planning to leak the source code, and so have open sourced it before he could do that."

"FTR: It was not my decision to add pwn20wnd to the Electra team. nullpixel added him to the git repository without giving me much choice. He has blown his contributions way out of proportion and was stirring up unnecessary hype on twitter without asking any of us first."

"I will let the Github repo speak for itself to show how pwn has been blowing his contributions way out of proportion. iOS 11.0-11.2.6 jailbreak was completed a long time ago without pwn. He really only did work on the UI and the nonce setter"
---

In response to the allegations, Pwn20wnd tweeted, "So let me clear it up here: I planned on building a new open source jailbreak from scratch. But I never planned on leaking Electra’s code. That’s such a pointless attack. Oh and GitHub repo speaks for itself right? It really does. I have done a way more job than what he claims I did. You can check it out."

Developers can check out the source code for Electra at the link below. We're expecting a new release soon that will replace Cydia with Sileo. Please follow iClarified on Twitter, Facebook, Google+, or RSS for updates.

Note: You can find instructions on how to jailbreak your iPhone with Electra by clicking here. 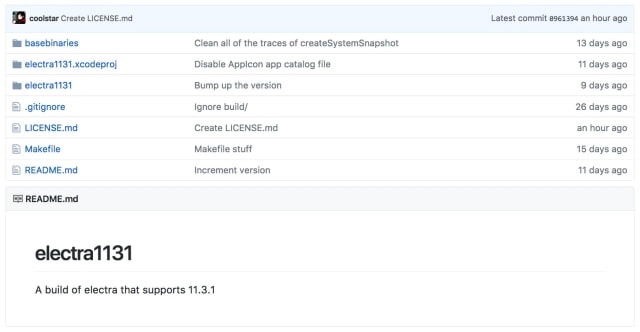 JuergenWest - July 23, 2018 at 9:01am
Airing dirty laundry now are we? I expect that from trump but you guys? Come on now, let’s be more mature than that. Calm down with the egos, does the amount of credit really even matter in the grande scheme of things?
Reply · Like · Mark as Spam

D4xM4Nx - July 18, 2018 at 9:51pm
We all know that them iOS hackers are basically kiddos... pretty much begging for attention and whatnot. Sadly what the JB community has been for years... let alone the hate they (hackers) get either when releasing tools or not.
Reply · Like · Mark as Spam

1reader - July 18, 2018 at 6:48pm
And now Apple will learn even more from this jb, so patches will come sooner. Good job boys! Ps. Fighting will not help the community
Reply · Like · Mark as Spam