Apple has approved a government Do Not Disturb app in India after the company's telecom regulator threatened to ban iPhones from the country's cellular networks.

After years of waiting for Apple to implement anti-spam measures, India threatened to ban the iPhone if the government developed Do Not Disturb app wasn't approved by January 2019, reports VentureBeat. The app entitled TRAI DND is now available ahead of that deadline.

The average person in India receives upwards ten unwanted calls and messages each day, according to some reports. The DND app lets users report spam calls to their telecom.

With this App, consumers will be able to:
1) Register their mobile number under DND (Do-Not-Disturb)
2) Report spam SMS/Calls, after DND registration.

TRAI DND App will not block any SMS/Calls from authentic businesses/entities that you have subscribed too, e.g your bank, food delivery apps, travel/taxi apps etc. However user will be responsible for any loss occurred if they report these Call/SMS.

You can download the app from the link below. 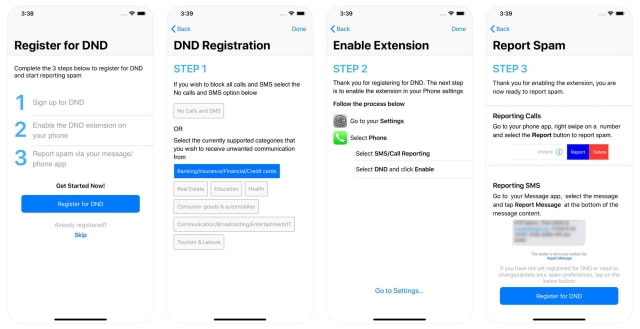