The Electronic Frontier Foundation has launched a new #FixItAlready campaign demanding that major tech companies fix serious security and privacy issues with their services and platforms.

Here are the first nine issues and companies that the EFF is focused on...

Take Action Now:
● Android should let users deny and revoke apps' Internet permissions.
● Apple should let users encrypt their iCloud backups.
● Facebook should leave your phone number where you put it.
● Slack should give free workspace administrators control over data retention.
● Twitter should end-to-end encrypt direct messages.
● Venmo should let users hide their friends lists.
● Verizon should stop pre-installing spyware on its users’ phones.
● WhatsApp should get your consent before you’re added to a group.
● Windows 10 should let users keep their disk encryption keys to themselves.

Regarding Apple iCloud, the EFF says:

"Data on your Apple device is encrypted so that no one but you can access it, and that’s great for user privacy. But when data is backed up to iCloud, it’s encrypted so that Apple, and not just the user, can access it. That makes those backups vulnerable to government requests, third-party hacking, and disclosure by Apple employees. Apple should let users protect themselves and choose truly encrypted iCloud backups."

More details about the Fix It Already campaign can be found at the link below! 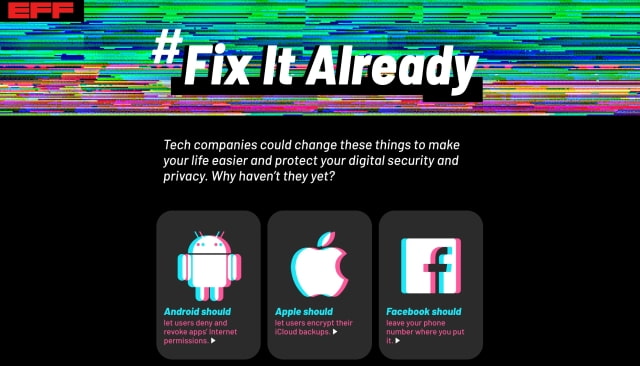