Apple employees say the company's retail stores have become an 'exercise in branding' and no longer service customers well, according to a Bloomberg report.

Current and former employees tell Bloomberg that a combination of factors have led to a customer service decline at Apple Stores. They say it's become increasingly difficult for visitors to quickly purchase an item or get support for their device by stopping at their local Apple Store.

“It took me forever to get someone to sell me the product,” says Web Smith, who runs 2PM Inc., an e-commerce research and consulting firm. “It’s become harder to buy something, even when the place isn’t busy. Buying a product there used to be a revered thing, now you don’t want to bother with the inconvenience.”

Sources say that changes made by former SVP of Retail Angela Ahrendts are partly to blame. Ahrendts worked to turn the Apple Store experience into a more luxurious one, getting rid of unsightly lineups and checkouts.

One of her first moves was to turn the stores into “Town Squares,” where shoppers could hang out and, in industry parlance, “spend time with the brand.” Lines at the Genius Bar would have spoiled the effect, so stores started replacing the beloved customer-service counters with Genius Groves (comfortable seating under trees), tables and roaming Geniuses. Checkout counters also disappeared in favor of salespeople armed with mobile devices. The goal was to make Apple stores more like luxury showrooms, pushing offstage the unseemly business of checking out and fielding complaints.

Apple's tremendous rate of growth worsened the situation. The company has opened over 500 new retail stores and hired 70,000 additional employees over the past 18 years. This growth resulted in workers who are no longer as technically savvy as they used to be.

“Employees used to be very skilled,” one source says. “When you came to Apple, you could walk in and talk to someone who happens to be a musician or videographer on the side, really knowledgeable. They hire really nice people now, but they are much less technical.”

When Ron Johnson was SVP of Retail, sales associates got three weeks to a month of training but now they get a week if they are joining an existing store. Geniuses were previously trained at Apple's headquarters in Cupertino but they are now mostly trained in stores.

With veteran Apple executive Deirdre O’Brien taking over as SVP of Retail and People, some employees are speculating that she will bring back the Genius Bar and perhaps create separate areas to promote Apple Music, Apple News+, the upcoming TV+ video service and iCloud storage. 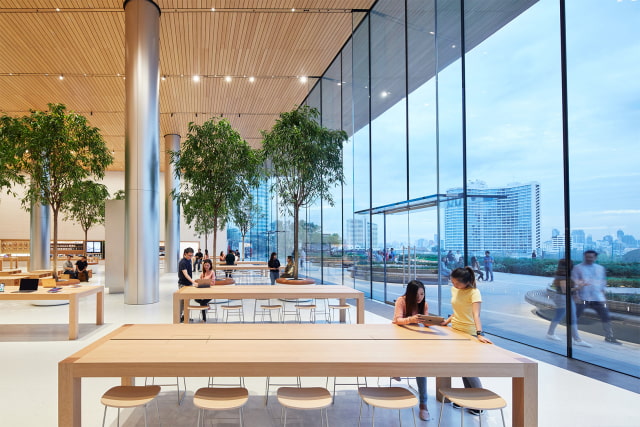 mohammadsti - May 8, 2019 at 1:59am
Yes I totally agree that the staff has no clue about apple products and ends up getting different answers, and yes you have to wait to get your needs.
Reply · Like · Mark as Spam

NoGoodNick - May 7, 2019 at 8:41pm
I’m sorry, but having a huge store with loads of idiots ‘hanging out’ and NOT buying anything is idiotic. Once again, it’s single executives getting ‘great marketing ideas’ and no one is ensuring that ANYTHING works as it should. Apple nearly folded once when they replaced designers for marketing morons, and the same thing is happening under Tim Cook. He’s too busy chasing the ‘next new idea’ to ensure anything succeeds. Marketing ideas are a dime-a-dozen, and without follow-through, aren’t with anything.
Reply · Like · Mark as Spam

fackyoo - May 7, 2019 at 7:21pm
One time I took my daughter ma Iphone10 She had an issue with her mute button The guy was telling me there is nothing wrong with it I was starting to get angry,telling me basically we have no clue what we were taking about . I told him listen buddy I have had apple products before you were born , First of all u are. It trying to help me ,keep it mind without me “customers “ u are not going to have a job. Think god u have customers that visit your store I don’t leave the store even told him Iam not going to take a refurbish replacement since ur being a duck
Reply · Like · Mark as Spam

PaulieP - May 7, 2019 at 4:42pm
Apple stores are hit or miss and mostly there a mess. Almost 99% of the employees there are snotty, stuck up, rude, sarcastic, and they think they’re better than you. Aka pricks! I stopped going to Apple quite sometime ago because there is no love in that store. The employees would rather correct you in any and every opportunity they have to prove that you are Inferior to them. If you have a question, good luck getting the right answer. You could ask three people and get three different answers. None of them are on the same page, there’s no training, they’re all a bunch of spoiled brats Who have had an iPhone in their pocket since they were five years old. Shame!
Reply · Like · Mark as Spam
2 More Comments
Recent