Twitterrific for macOS has been updated with support for Twitter's new quoted tweets with media, full images in your timeline, new themes, Fixerrific for Safari, and more.

Re-imagined from the ground up to be the Mac's most friendly, powerful and modern Twitter client. Twitterrific makes Twitter fun. 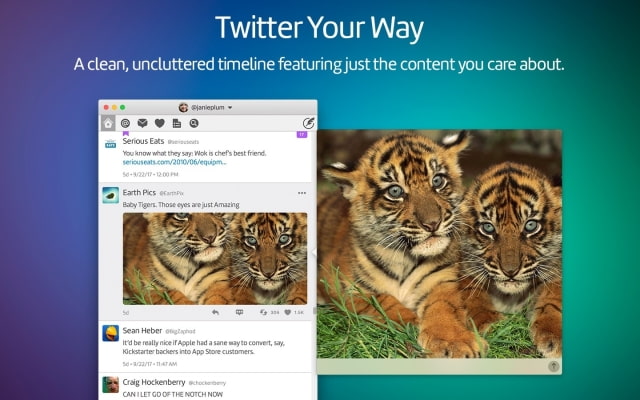 • Support for Twitter's new quoted tweets with media:
- When quoting another tweet, you can attach photos, a video, or an animated GIF
- The timeline displays both the media you attached and your quoted tweet

• Fixerrific Safari Extension:
- Cleans up and simplifies twitter.com
- Useful for those sad occasions when you must use the website
- Enable in Safari's Extensions preference panel

IMPROVEMENTS
• Added options to turn retweets on or off to the profile view’s action menu
​• Media popups are now larger and optimized for improved presentation
​• Reduced memory usage by more aggressively purging the image cache
​• Added a High Contrast Text presentation option in Appearance Prefs
​• Replies to a tweet are now sorted by date instead of by engagement
​• Timelines never refresh if the “Automatically Refresh Timelines” setting is off
​• Added a "More" button to the muffle panel for bulk operations such as deleting them all, activating them all, deactivating them all, and more
​• Added image previews for apps.apple.com links
​• Improved scrolling performance
​
BUG FIXES
• Fixed a bug that caused newly muffled tweets to appear blank
​​• Fixed several issues that caused crashes when clearing the cache
​• Trends are now correctly sorted by popularity

You can purchase Twitterrific from the App Store for $7.99. 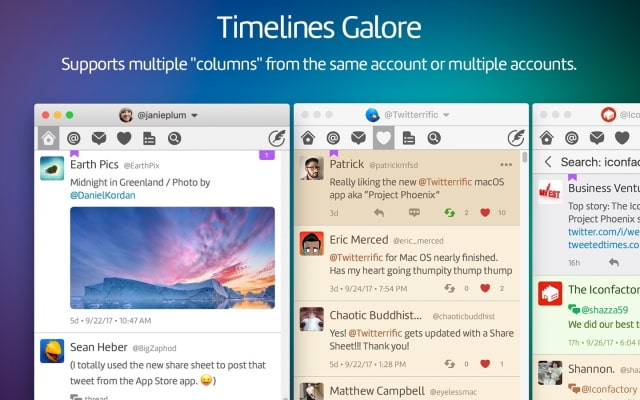