T-Mobile has announced that it's the first carrier in the world to launch a commercial nationwide standalone architecture 5G network.

The move immediately expands the Un-carrier’s 5G footprint — already the nation’s largest — to nearly 2,000 additional cities and towns, brings 5G deeper into buildings and sets the stage for future groundbreaking applications. In other words, SA 5G is the future, and T-Mobile is leading the charge to bring it to life.

“Since Sprint became part of T-Mobile, we’ve been rapidly combining networks for a supercharged Un-carrier while expanding our nationwide 5G footprint, and today we take a massive step into the future with standalone 5G architecture,” said Neville Ray, President of Technology at T-Mobile. “This is where it gets interesting, opening the door for massive innovation in this country — and while the other guys continue to play catch up, we’ll keep growing the world’s most advanced 5G network.”

In the near-term, T-Mobile says this standalone architecture will enable use of its entire 600 MHz footprint for 5G.

With non-standalone network architecture (NSA), 600 MHz 5G is combined with mid-band LTE to access the core network, but without SA the 5G signal only goes as far as mid-band LTE. With today’s launch, 600 MHz 5G can go beyond the mid-band signal, covering hundreds of square miles from a single tower and going deeper into buildings than before. Thanks to T-Mobile’s ongoing 5G build, and by flipping the switch on SA, the Un-carrier has immediately increased its 5G footprint by 30 percent — now covering 1.3 million square miles in more than 7,500 cities and towns across the country. 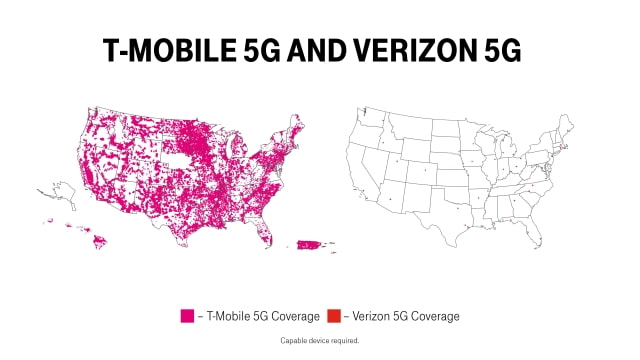