Facebook CEO Mark Zuckerberg spoke out against Apple during a webcast with over 50,000 employees on Thursday, accusing the company of monopolistic behavior that is harmful to customers, reports BuzzFeed.

“[Apple has] this unique stranglehold as a gatekeeper on what gets on phones,” declared Zuckerberg. He also said that the company's App Store “blocks innovation, blocks competition” and “allows Apple to charge monopoly rents.”

Zuckerberg was answering a question about Apple's rejection of cloud gaming related apps, including Facebook's own gaming app.

“That’s innovation that could really improve people’s lives,” Zuckerberg said. “And Apple’s just balking at it.”

This is at least the fourth time Facebook has spoken out against Apple's policies this month. Earlier today, Facebook announced that Apple refused to approve an app update that revealed its 30% in-app purchase fee to users and earlier this week, the company warned publishers that their revenue could drop by over 50% once iOS 14 is released. 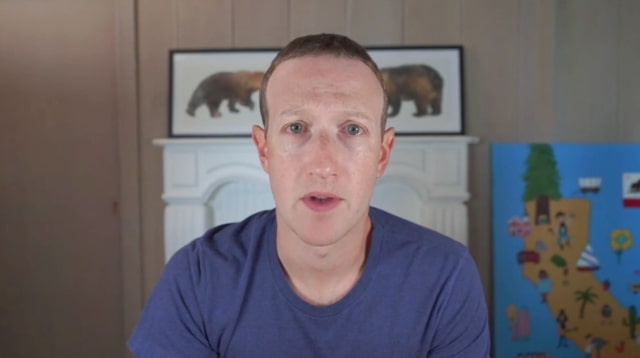 tobybartlett - August 28, 2020 at 8:24pm
Finally Apple realized they could fix the thousands of crimes that are constantly shoved down the throats of their customers by Facebook. I hope Apple pulls all Facebooks apps and permanently bans anything related to Facebook forever from the App Store, on the grounds of privacy. We lived without Facebook before, and we will live just fine without it when it finally leaves our lives. Hopefully like the Fortune 500 companies, the entire cities and the millions of individuals who have banned/deleted their Facebook accounts shows Apple very clearly: We. Don’t. Want. Facebook. Also by banning them, Apples ad campaign about privacy being a huge focus for them almost writes itself if they get rid of Facebook. Something like: “You saw how Facebook manipulated the 2016 presidential election. How Facebook allows the spread of hate with no repercussions, and how Facebook said via Zuckerberg told Congress “we will allow false statements to be placed inside political ads.” I’m so happy to put privacy over conceding to a mega corporation. I guess $2 trillion is what’s required to take out Facebook. 😉
Reply · Like · Mark as Spam
4 More Comments
Recent