Epic, Spotify, Tile, and others have announced the formation of a 'Coalition for App Fairness' that will advocate for freedom of choice and fair competition across app ecosystems.

Basecamp, Blix, Blockchain.com, Deezer, Epic Games, the European Publishers Council, Match Group, News Media Europe, Prepear, Protonmail, SkyDemon, Spotify, and Tile have established the Coalition for App Fairness (CAF), an independent nonprofit organization. CAF will advocate for enforcement and reforms, including legal and regulatory changes, to preserve consumer choice and a level playing field for app and game developers that rely on app stores and the most popular gatekeeper platforms.

“As enforcers, regulators, and legislators around the world investigate Apple for its anti-competitive behavior, The Coalition for App Fairness will be the voice of app and game developers in the effort to protect consumer choice and create a level playing field for all,” said Horacio Gutierrez, Head of Global Affairs and Chief Legal Officer at Spotify.

The CAF has published a list of 10 principles it would like to see adopted by App Stores...

-----
App Store Principles
1. No developer should be required to use an app store exclusively, or to use ancillary services of the app store owner, including payment systems, or to accept other supplementary obligations in order to have access to the app store.

2. No developer should be blocked from the platform or discriminated against based on a developer’s business model, how it delivers content and services, or whether it competes in any way with the app store owner.

3. Every developer should have timely access to the same interoperability interfaces and technical information as the app store owner makes available to its own developers.

4. Every developer should always have access to app stores as long as its app meets fair, objective and nondiscriminatory standards for security, privacy, quality, content, and digital safety.

5. A developer’s data should not be used to compete with the developer.

6. Every developer should always have the right to communicate directly with its users through its app for legitimate business purposes.

7. No app store owner or its platform should engage in self-preferencing its own apps or services, or interfere with users’ choice of preferences or defaults.

8. No developer should be required to pay unfair, unreasonable or discriminatory fees or revenue shares, nor be required to sell within its app anything it doesn’t wish to sell, as a condition to gain access to the app store.

9. No app store owner should prohibit third parties from offering competing app stores on the app store owner’s platform, or discourage developers or consumers from using them.

10. All app stores will be transparent about their rules and policies and opportunities for promotion and marketing, apply these consistently and objectively, provide notice of changes, and make available a quick, simple and fair process to resolve disputes.
-----

The coalition is also asking other companies to join them.

"The Coalition for App Fairness was created by industry leading companies who want to see freedom of choice for consumers and a level playing field for businesses. This is an open call to all developers, big and small, to join us – and together we will fight back against the monopolist control of the app ecosystem by Apple." 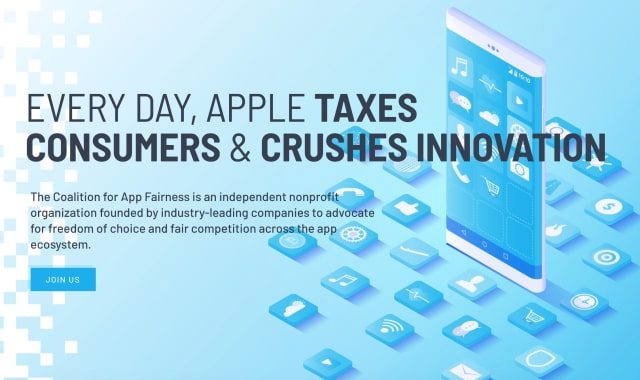