Apple overtook Samsung to become the top smartphone maker in the fourth quarter of 2020, according to a new report from TrendForce.

It's estimated that smartphone production reached 364 million units last quarter with Apple accounting for 21.3% versus Samsung at 18.4%.

-----
Even though the share of high-end models in global smartphone sales shrank in 2020 due to the COVID-19 pandemic, Apple was able to push through the headwinds and capture market share by introducing 5G models and adopting an aggressive pricing strategy. Apple produced 77.6 million units of iPhones in 4Q20, an 85% increase QoQ, thereby overtaking Samsung and ranking first amongst all smartphone brands. It should also be pointed out that iPhone 12 devices accounted for about 90% of the iPhone production in 4Q20. For 1Q21, sales of iPhone 12 devices remain strong, and total iPhone production is expected to reach 54 million units, with iPhone 12 models again accounting for about 80% of this figure. Looking further ahead, Apple plans to launch four new flagship iPhone devices in 2H21 and is likely to adhere to its aggressive pricing strategy. Regarding hardware advances, Apple will upgrade its mobile SoC to the A15 bionic SoC. Other than that, it will optimize various existing functions of the iPhone device. On the whole, the four upcoming flagship models can be regarded as extensions to the iPhone 12 series.
------ 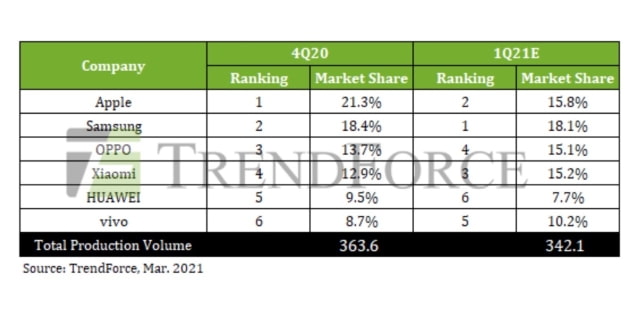