Docker Desktop for Mac has been updated with native support for Apple Silicon Macs. The release was announced in a blog post earlier today.

-----
First, we want to say a big thank you to our community. The excitement you have shown about being able to run Docker Desktop on the new M1 chip has been tremendous and hugely motivating to us. Your engagement on testing builds and reporting problems has been invaluable. As soon as Apple announced the new M1 chip, you let us know on our public roadmap that this was a high priority for you, and it quickly became by far our most upvoted roadmap item ever. You also responded very positively to our previous blog posts.

After the M1 machines were publicly available, those of you on our developer preview program tested some very early builds. And then as we moved into public tech previews and release candidates, many more of you joined in with testing your enormous variety of use cases, and reporting bugs. In total we have had 45,000 downloads of the various preview builds, and 140 tickets raised on our public bug tracker, not to mention countless messages on our community Slack.

We know that Docker Desktop is an essential part of the development process for so many of you. We are very grateful that we have such an active and supportive community, and that you have shared both your excitement and your feedback with us. We couldn’t have gotten here without you.
-----

You can download Docker Desktop from the link below... 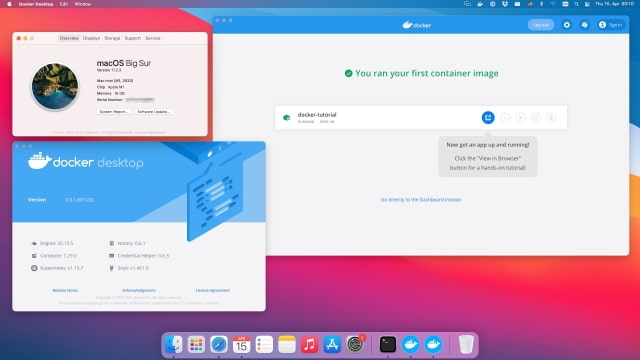