The checkra1n jailbreak has been updated to version 0.12.3 beta bringing support for iOS 14.5 and M1 Macs.

Checkra1n supports iPhone 5s through iPhone X. Users on A11 devices can disable BPR to jailbreak but that is not recommended.

Highlighted changes
● Support for iOS 14.5
● Preliminary support for M1 Macs - read the announcement
● New --force-revert command line option to force rootFS reverting without access to the loader app
The included binpack has been updated and thinned

Notes
● A11 devices on iOS 14.0 and above require removing the passcode and enabling “Skip A11 BPR check” in the options. This is not recommended, but it’s there.

Known issues
● A7 devices will currently not work with the Linux version
● The exploit may not work as reliably on some devices, such as the Raspberry Pi Zero and Raspberry Pi 3
● Linux GUI build when using CLI mode doesn’t support auto assertion of DFU mode on advanced Apple TV 4k breakout boards
● bridgeOS: If you disconnect the cable, then as soon as macOS boots it’ll take over the USB connection and disallow communication with the T2
● Some users have reported checkra1n crashing when Chinese is set as the only system language. It is unknown whether any other language is affected.

Here's the announcement on support for M1 Macs as hosts.

---
Today we're releasing checkra1n 0.12.3 with support for Apple Silicon Macs as hosts. Due to changes in the USB stack, you may be required to unplug and replug the lightning cable as part of the jailbreaking process.

There is an issue in the USB stack of Apple Silicon Macs that will cause certain devices to crash and reboot when attempting to perform checkm8 over a USB-C port. The problematic part of the exploit can be disabled and replaced with a manual unplugging and replugging of the lightning cable. Checkra1n will detect the conditions that would cause this issue, and instruct the user to perform the replug if necessary.

You can download the checkra1n 0.12.3 beta from here or at the link below:
● Where to Download the Checkra1n Jailbreak From 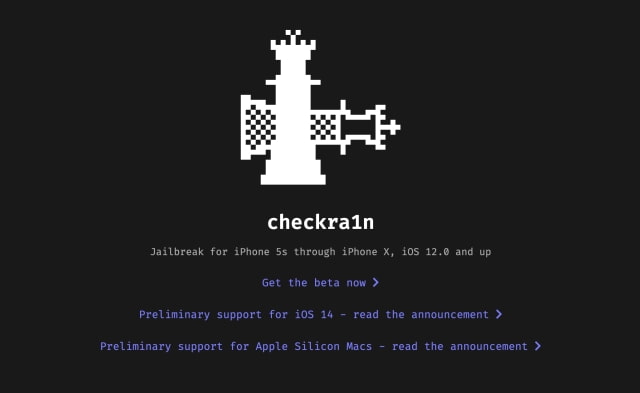