Apple has given Zoom access to a private API that enables the camera during iPad Split View multitasking. Developer Jeremy Provost discovered the special treatment while trying to enable the feature for his own Zoom client, entitled "Participant for Zoom".

Access to the camera is permitted via a private entitlement. For some features, like CarPlay, developers can apply for entitlements. However, Provost was not able to discover a way to apply for the iPad Camera Multitasking entitlement which is apparently called com.apple.developer.avfoundation.multitasking-camera-access.

Access to the feature gives Zoom's app a competitive advantage. It's beneficial to be able to keep an eye on your notes or be able watch a presentation while videoconferencing.

Provost notes that while there should be control over who gets access to the API, Apple is not treating all developers fairly.

It’s understandable that this entitlement may not be appropriate for every app, or perhaps there may be ways for it to be abused. Maybe it makes sense for there to be an approval process, like with CarPlay. But it doesn’t make sense for this to be private, undocumented, and only accessible to Apple’s preferred partners. You can’t say “we treat every developer the same” while privately giving special capabilities to certain developers. 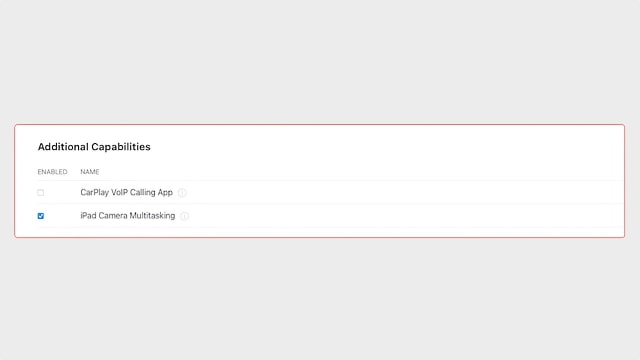 iAmMe - May 10, 2021 at 6:47am
I think it’s experimental and who would they experiment it with than zoom who have wide clients
Reply · Like · Mark as Spam
Recent