Apple has published a new document that claims sideloading and third party app stores would expose users to serious security risks. This comes as even additional antitrust investigations have been opened into the company and its ecosystem.

Some have suggested that we should create ways for developers to distribute their apps outside of the App Store, through websites or third-party app stores, a process called "sideloading." Allowing sideloading would degrade the security of the iOS platform and expose users to serious security risks not only on third-party app stores, but also on the App Store. Because of the large size of the iPhone user base and the sensitive data stored on their phones – photos, location data, health and financial information – allowing sideloading would spur a flood of new investment into attacks on the platform. Malicious actors would take advantage of the opportunity by devoting more resources to develop sophisticated attacks targeting iOS users, thereby expanding the set of weaponized exploits and attacks – often referred to as a “threat model” – that all users need to be safeguarded against. This increased risk of malware attacks puts all users at greater risk, even those who only download apps from the App Store. Additionally, even users who prefer to only download apps from the App Store could be forced to download an app they need for work or for school from third-party stores if it is not made available on the App Store. Or they could be tricked into downloading apps from third-party app stores masquerading as the App Store.

As usual, Apple fails to mention that macOS has allowed "sideloading" for years. You can read the full "Building a Trusted Ecosystem for Millions of Apps" document at the link below... 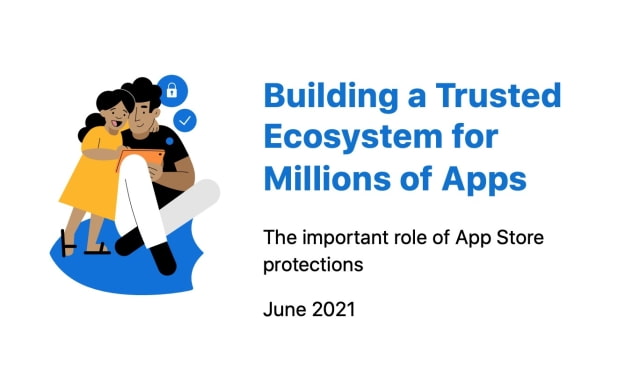 Raas al Ghul - June 23, 2021 at 2:17pm
Yes but most of us have far more sensitive information on our phones than computers
Reply · Like · Mark as Spam
Recent