Global smartwatch shipments soared 47% annually to reach 18 million units in Q2, according to a new report from Strategy Analytics. Apple managed to maintain its first position with 52% marketshare. Samsung came in second and Garmin placed third.

Steven Waltzer, Senior Analyst at Strategy Analytics, said, “Global smartwatch shipments soared 47 percent annually from 12.3 million units in Q2 2020 to 18.1 million in Q2 2021. Smartwatch shipments worldwide are growing at their fastest rate since 2018. Smartwatch growth is back to pre-pandemic levels. Online sales of fitness-led devices that help to support personal healthcare remain popular and are the main driver of the smartwatch boom.”

Neil Mawston, Executive Director at Strategy Analytics, added, “We estimate Apple Watch shipped 9.5 million units worldwide in Q2 2021, rising 46 percent from 6.5 million in Q2 2020. Apple’s global smartwatch marketshare is holding steady around the 52 percent level. Apple still owns half the market and is keeping rivals at bay. Apple Watch Series 6 today is by far the world’s most popular smartwatch model, due to its blend of sleek design, good usability on a small screen, and a growing portfolio of health and fitness apps.”

Steven Waltzer, Senior Analyst at Strategy Analytics, added, “We estimate Samsung shipped 2.0 million units worldwide in Q2 2021, rising an above-average 54 percent from 1.3 million in Q2 2020. Samsung’s global smartwatch marketshare is holding steady around the 11 percent level. Samsung continues to perform well in its core smartwatch markets of North America, Europe, and South Korea. We estimate Garmin shipped 1.5 million units worldwide in Q2 2021, rising a modest 25 percent from 1.2 million in Q2 2020. Garmin’s global smartwatch marketshare has drifted from 10 percent to 8 percent during the past year. Garmin has a strong portfolio of smartwatches, such as Forerunner 55 and Venu, but it is facing tougher competition in Asia and elsewhere from rivals like Xiaomi and Samsung.”

Neil Mawston, Executive Director at Strategy Analytics, added, “The smartwatch market is on fire. The smartwatch outlook for the rest of the year and into the Q4 holiday season is highly promising. Samsung’s new Galaxy Watch 4 is packed with compelling apps that track your holistic health better than ever before. Chinese brands, like Xiaomi and OPPO, are piling in with lower-cost 4G smartwatches optimized for mobile operators. Meanwhile, Apple Watch Series 7 is eagerly awaited, slated for September or October, and rumored to contain a larger display that will enhance further the app experience.”

You can get the full report from the link below... 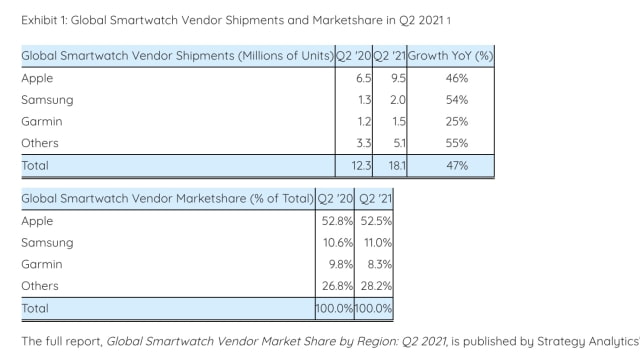