In “Ted Lasso,” Jason Sudeikis plays a small-time college football coach from Kansas hired to coach a professional soccer team in England, despite having no experience coaching soccer. In addition to starring, Sudeikis serves as executive producer, alongside Bill Lawrence (“Scrubs”) via his Doozer Productions, in association with Warner Bros. Television and Universal Television, a division of NBCUniversal Content. Doozer’s Jeff Ingold also serves as an executive producer with Liza Katzer as co-executive producer. The series was developed by Sudeikis, Lawrence, Joe Kelly and Brendan Hunt, and is based on the pre-existing format and characters from NBC Sports.

“Ted Lasso” recently won three Emmy Awards at the 73rd Creative Arts Emmys for Outstanding Casting for a Comedy Series, Outstanding Sound Mixing For A Comedy Or Drama Series and Outstanding Single-Camera Picture Editing For A Comedy Series, after breaking records by becoming the most nominated freshman comedy series ever this year, with 20 Emmy nominations. The series was also honored this year with an esteemed Peabody Award for excellence in storytelling, and star Jason Sudeikis won Outstanding Performance by a Male Actor in a Comedy Series Award at the 2021 Screen Actors Guild Awards. The series also has received the AFI Television Program of the Year honor, and won three Critics Choice Awards for Best Comedy Series, Best Actor in a Comedy Series for Sudeikis, and Best Supporting Actress in a Comedy Series for Hannah Waddingham, sweeping all categories in which the widely beloved series was nominated. Earlier this year, the Writers Guild of America crowned “Ted Lasso” with wins for both Best Comedy and Best New Series.

“Ted Lasso” season two made its global debut on Apple TV+ on Friday, July 23 with the first episode, followed by one new episode every Friday. The first season of “Ted Lasso” is available to stream in full on Apple TV+ on the Apple TV app. 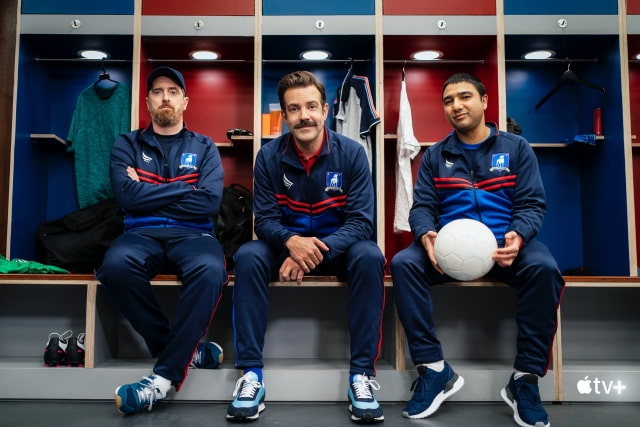