The iPhone Dev-Team has published a video demonstrating the upcoming SHAtter jailbreak for iOS 4.1.

The exploit (and payload) was developed by @pod2g a few months after @p0sixninja of the Chronic Dev Team discovered the crash. That team is hard at work bringing you a brand new tool to make use of the exploit. It’s not the sort of thing that can be developed overnight so please be patient while waiting for any announcements from them.

In the meantime, we’ve put @pod2g’s exploit into a beta version of PwnageTool to test the waters. The SHAtter exploit was enough to convince the iPod touch 4G to restore to our custom IPSW. The successful result is shown below!

Although PwnageTool was a useful first test of a full iPod 4G jailbreak via SHAtter, it’s really overkill compared to the faster tools being developed. Its main use in PwnageTool will be for those with iPhone4’s, to allow updates while preserving the baseband and ultrasn0w carrier unlock. In any event, this is another exciting time for iPhone and iPod touch users…the cat and mouse game continues!

The PwnageTool beta is for internal testing only. You can take a look at the video demonstration below... 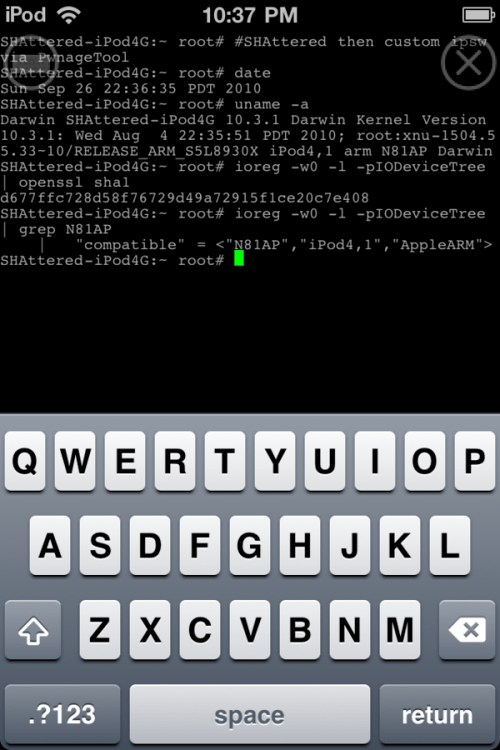 jail break - December 10, 2010 at 9:40am
very nice articles and info.. my site is http://www.fasterpony.com all about iphone jailbreak
Reply · Like · Mark as Spam

Jeff Risk - September 28, 2010 at 11:32am
I got iphone 3GS 4.0.1 but mistakenly i upgraded it to 4.1 and now i m stuck and waiting for something that can unlock my phone. My phone is jailbroken but not unlocked, if someone can help me in how i can downgrade it to previous version, i will be very grateful to you. Thanks
Reply · Like · Mark as Spam

t_01 - September 27, 2010 at 3:12pm
Why does everyone always get so angry and aggressive? It\'ll be out when its out. If you don\'t want a jailbreak or aren\'t interested, then don\'t post a comment and shout at others. Good work Chronic/iPhone Dev team. Yet more excellent work. You guys are truly amazing.
Reply · Like · Mark as Spam

madcow - September 27, 2010 at 1:05pm
This is a jailbreak not an unlock. They never mentioned unlock. Why are people asking when this jailbreak/unlock will be out, there is NO unlock yet. This will only jailbreak your phone if you upgrade to 4.1 you will NOT unlock it. Wait for pwnage tool to be upgraded so it preserves the baseband.
Reply · Like · Mark as Spam
56 More Comments
Recent