A new report from MacTrust claims to offer new information about improvements in the upcoming MacBook Pros .

All models are said to be between 15-20% lighter, being made of an amorphous alloy Apple purchased that is stronger, lighter, and more scratch resistant. The edges of the device have reportedly been smoothed and a new battery technology is said to provide 20% more battery life. A new display is also being utilized that uses less power. RAM and SSD upgrade price will supposedly be "significantly" lower.

MacBook Pro 13"
The 13" MacBook Pro will reportedly get an upgrade to the Sandy Bridge processor and receive a BTO option that ups the display resolution to 1440x900 in gloss or matte. Battery life is said to be increase from 10 hours to 12 and the weight is said to drop from 4.5 pounds to 3.7.

MacBook Pro 15"
The 15" MacBook Pro will reportedly get an upgrade to the Sandy Bridge processor, get a battery life of 11 hours, and a matte option on the standard resolution display.

This module is said to be gaining a modular bay for the optical drive, which would give users the option to replace the optical drive with a second hard-drive. It may also gain an ExpressCard/34 slot and a third USB port. The weight of the 15" will reportedly decrease from 5.8 pounds to 4.6 pounds. 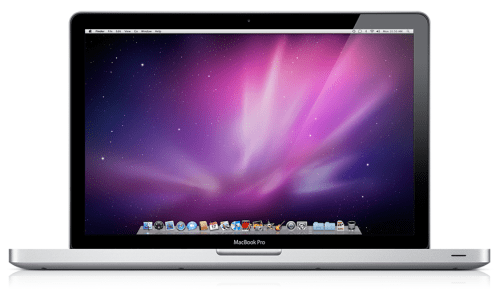