Dr. Raymond M. Soneira, President of DisplayMate Technologies, has published an analysis of the iPad 2's display comparing it to the iPhone 4's.

As we show in the Comparison Table below the display on the iPad 2 delivers almost identical performance to the impressive iPhone 4 Retina Display. Although the iPad has a higher pixel resolution than the iPhone 4, the screen is much larger so the number of Pixels Per Inch is only 132 ppi compared to the iPhone 4 Retina Display value of 326 ppi. Lower ppi makes the pixels more apparent, an effect called pixelation. The very high ppi is a major marketing feature for the iPhone 4, but it’s actually something of an overkill (and primarily there for App compatibility) because existing anti-aliasing methods can successfully reduce noticeable pixelation at lower resolutions and ppi.

Soneira notes that there are two significant shortfalls in the OS display software that could easily be fixed to improve the iPad's display performance. First, he says the current anti-aliasing reduces perceived sharpness of text and graphics. This could be remedied by adding sub-pixel anti-aliasing to the iPad which would "take some of the unwarranted pressure off the iPad's current ppi". Second he says there is an auto brightness bug that locks onto the brightest ambient light sensor value that has been measured at any point starting from the time the unit was awakened and holds that peak value even after the ambient light decreases substantially afterwords. "This keeps the screen overly bright for the current conditions and wastes precious battery power." 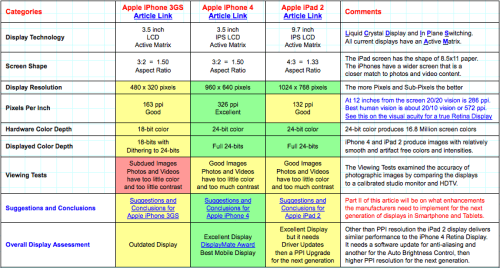 WTF - March 16, 2011 at 2:07pm
WTF IS THIS COMPARAISON, COMPARE THE IPAD2 WITH THE IPAD1, NOT THE IPHONE 3GS WTFFFF COMPARE ORANGES WITH ORANGES... AND THE IPHONE 4 DISPLAY IS 10000X BETTER THAN THE IPAD DISPLAY. WHAT A POOR COMPARAISON ROFL.
Reply · Like · Mark as Spam