Apple has seeded a second beta of iOS 5.0.1 to developers.

Developers can download the new beta from the link below... 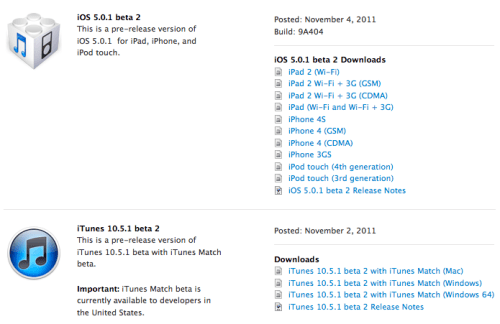 Barney - November 5, 2011 at 3:23pm
Ok with this Update I now have a New problem , when Talking holding the iPhone 4 with the dreaded "Death Grip" I've Noticed that The Battery Level Begins to Climb !! It appears that Squeezing the Phone harder Now Charges the Phone!! the Problem that this causes is that after a 5-10 Minute call the Battery I've seen to Battery level climb to over 105% at which Point the battery level display turns red and begins Flashing as if to warn of an over-charged state... Come On apple Get this Fixed!!
Reply · Like · Mark as Spam

Iceblu121 - November 5, 2011 at 4:48am
Wow 5.01 and that is the only bugs they are working on!! Lol How about this bug open a text message add A picture in the text field from your photo album Then use Siri. And speak. Then when u see Siri input ur text. Try and send it The app crashes But if u speak in the message first then add a picture And send it works. There is 1 bug of a few that I seen
Reply · Like · Mark as Spam