Apple and Google were both fighting to be on top this holiday season and it looks like Apple may have outdone Google on Christmas day, reports FORTUNE.

A Flurry Analytics report estimates that on Christmas Day, iOS and Android activations jumped to more than 6.8 million, a 353% increase over the baseline.

Considering that Android phones typically outsell the iPhone by 3:1, it's likely that Apple shot ahead thanks to the iPod touch and iPad being popular Christmas gifts. 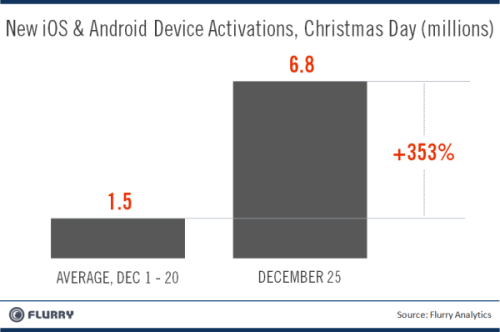 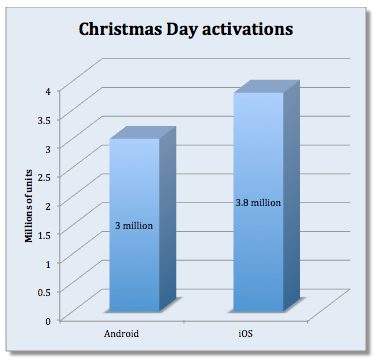 gustavio Leon - December 28, 2011 at 5:31pm
I actually purchased the Galaxy Tab 7.0 to test it, I just want to see what is all about, I have an iPhone 4, an iPad 1 and 2 both 3g and the tab now, the iPad 1 with JB and Phoneit-ipad, and works fine as a phone, NOT great, but works, and even the android is a good HW (lack of battery) and the OS is fine, I must say the return rate for the touch screen, of the IOS devices is a lot better, and I must add that I will keep my iPad 1 and 2 (waiting for the JB and the Phoneit-Ipad for the iPad 2) then I will sell the Samsung Tab and and use also my iPhone 4 (well,,, waiting for the iPhone 5...soon)
Reply · Like · Mark as Spam

TA - December 28, 2011 at 4:51pm
Android devices meaning phones, tablets etc.... From Samsung to Sony Ericsson all the way to acre. Hope this makes it clearer .
Reply · Like · Mark as Spam