A new variant of the Flashback Trojan is using three methods to infect Macs, reports Intego.

The malware first tries to install itself using one of two Java vulnerabilities. If this is successful, users will be infected with no intervention. If these vulnerabilities are not available – if the Macs have Java up to date – then it attempts a third method of installation, trying to fool users through a social engineering trick. The applet displays a self-signed certificate, claiming to be issued by Apple. Most users won't understand what this means, and click on Continue to allow the installation to continue.

Flashback.G injects code into web browsers and network applications looking for usernames and passwords from domains such as Google, Yahoo, CNN, Paypal, banks, and others. Some infected applications such as Safari and Skype will consequently crash. This malware also has an automatic update module that checks for new versions.

Intego notes that their VirusBarrier X6 detects Flashback.G and all other variants of this Trojan horse. In this case, the mere presence of VirusBarrier X6 causes the malware's installer to abort, so even if users do not have VirusBarrier X6′s real-time scanner active, the Trojan will look elsewhere. You can fix the Java vulnerabilities by updating your OS X installation. 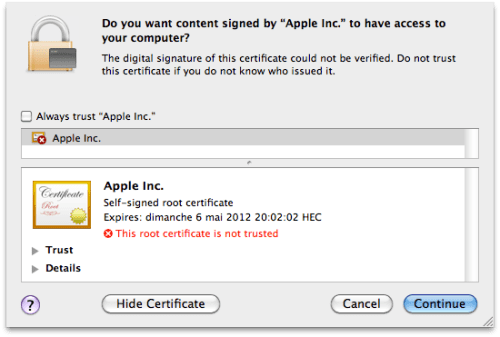 amyseltic - August 12, 2014 at 7:01pm
Mac users should update urgently their OS X installation to make sure their computer won`t be infected with the Flashback.G Trojan virus. Also there are other variants of this Trojan horse and installing a good antivirus like http://www.trendmicro.com/us/home/products/software/antivirus-for-mac/index.html minimizes the risk of your computer getting infected by any sort of viruses.
Reply · Like · Mark as Spam

brandon - February 26, 2012 at 6:27pm
I wish I had a MacBook I'm stuck with the fucking fail bill gates calls an awesome operating system...... windows sucks since I have a my computer I have had nothing but trouble and I heard there is a way to boot with Mac osx on windows how do I do that
Reply · Like · Mark as Spam

Doh! - February 25, 2012 at 2:31pm
Simple fact of the matter is, neither Mac's or Windows machines get infected unless they are operated by smacktard fuckwitts......... Lesson number one, be wary of certificates that are not trusted.
Reply · Like · Mark as Spam