MuscleNerd has announced the successful jailbreak of his iPod touch 4G on iOS 6 Beta.

Here's ioreg of my tethered-JB ipt4g 6.0: http://is.gd/1qOwvW ..MANY things including Cydia are broken, don't expect beta JB for a while!

New iOS 6 features include: an all new Maps app with Apple-designed cartography, turn-by-turn navigation and an amazing new Flyover view; new Siri features, including support for more languages, easy access to sports scores, restaurant recommendations and movie listings; Facebook integration for Contacts and Calendar, with the ability to post directly from Notification Center, Siri and Facebook-enabled apps like Photos, Safari and Maps; Shared Photo Streams via iCloud; and Passbook, the simplest way to get all your passes in one place. 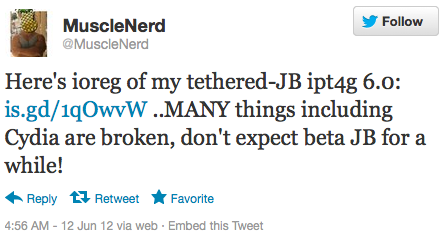 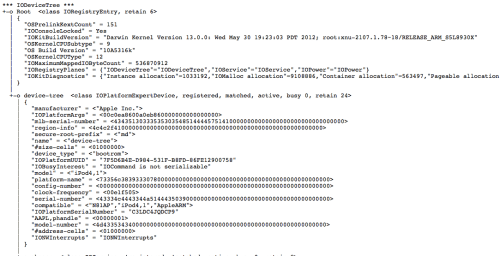 Steve-o - June 12, 2012 at 3:48pm
My first iPhone was a 3G, back then there was no "factory unlocked" in my country so jailbreaking and unlocking was the way to go if one wanted an iPhone. Next I bought the 3GS all the way from Hong Kong, this one came factory unlocked, no need to jailbreak etc. I'm on iPhone 4 now, and can get it factory unlocked in my own country, can use it on any carrier I want. I like the screening and security policy of apple, with a jailbreak I don't know what those poorly made tweaks do, some may even be opening backdoors etc. If you want to do all kind of stuff an aliendroid can then buy an android!! I also love to see some of the stuff Cydia can put on your iPhone or android has, but I'm not stupid. I'll wait till Apple implement it the it should be..secure. If I wanted to fool around I would have bought an android!
Reply · Like · Mark as Spam

Jim - June 12, 2012 at 3:38pm
looool musclegeek makes me laugh "don't expect JB for awhile" DUUUUUHHHH we know u guys are stupid cause iOS 6 comes out in fall and even then we expect another month or so for the release of untether JB!!!!! Wait him didn't pod2gay said he HAS the JB for ios 6 already??? Inquiring minds what's to know???
Reply · Like · Mark as Spam

madcow - June 12, 2012 at 3:44pm
Use that 'inquiring mind' to think. They have sploits to run a jailbreak but how can they test them or their stability without the final product? They can't. Not only that but there's the jailbreak, cydia requires upgrades then, mobile substrate and after that all the other apps. That's why it takes a month or more after release.
Reply · Like · Mark as Spam