Pod2g has announced the discovery of a security flaw in iOS that allows for spoofing of SMS messages.

The flaw has been present since the first iPhone and is still there in iOS 6 beta 4, notes the hacker.

In the text payload, a section called UDH (User Data Header) is optional but defines lot of advanced features not all mobiles are compatible with. One of these options enables the user to change the reply address of the text. If the destination mobile is compatible with it, and if the receiver tries to answer to the text, he will not respond to the original number, but to the specified one. Most carriers don't check this part of the message, which means one can write whatever he wants in this section : a special number like 911, or the number of somebody else.

In a good implementation of this feature, the receiver would see the original phone number and the reply-to one. On iPhone, when you see the message, it seems to come from the reply-to number, and you loose track of the origin.

Pod2g outlines some scenarios where this might be dangerous:
● pirates could send a message that seems to come from the bank of the receiver asking for some private information, or inviting them to go to a dedicated website. [Phishing]
● one could send a spoofed message to your device and use it as a false evidence.
● anything you can imagine that could be utilized to manipulate people, letting them trust somebody or some organization texted them.

As final warning, it's suggested that you never trust a SMS received on your iPhone at first sight, at least until Apple fixes the problem. 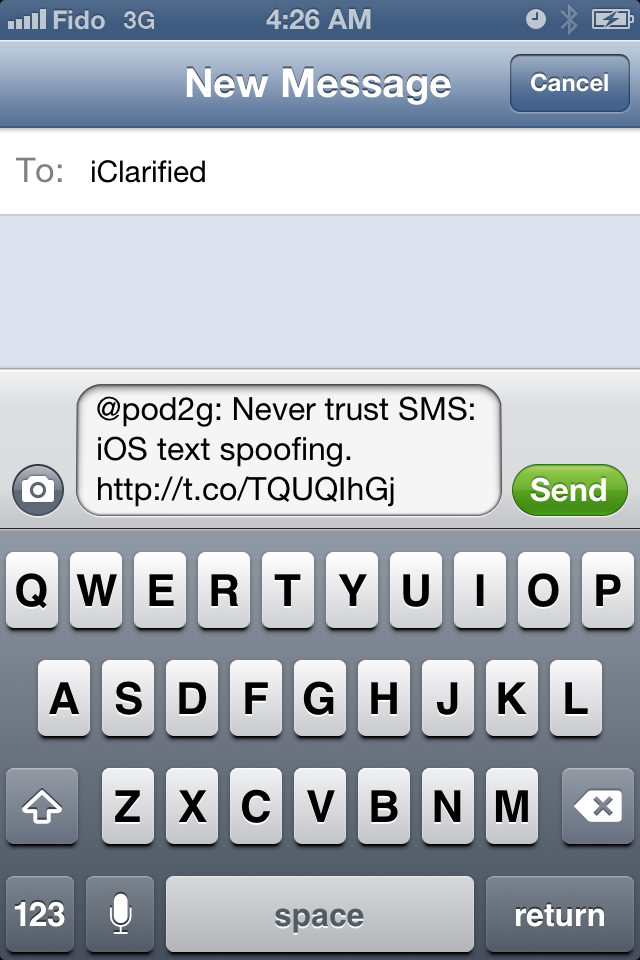 YoDude - August 17, 2012 at 1:30pm
Yup there is JB for iPhone 4 and earlier bt still cydia wud not be available even after jailbreak!
Reply · Like · Mark as Spam

sh - August 17, 2012 at 10:59am
If someone can write to the UDH they have enough SMSC access to spoof the sender address anyway so not really an important flaw.
Reply · Like · Mark as Spam