Some time ago I started to explore a crystal interface concept for iOS 7. I initially looked at the iOS notes app. Another app that I explored and applied the crystal interface concept to recently is the game center app. I believe the game center app would benefit by changing to a slide out nav instead of the tab bar. The reason for this is that “Me tab” and “Friend requests tab” have a lower frequency of use, unlike in say the app store app where you move between featured, updates, top charts and search frequently when using the app, so in that case the tab bar makes sense.

With Jonathan Ive taking on the responsibility for Human Interface design at Apple it's thought that he may drop the skeuomorphism in iOS 7 for a cleaner look.

Check out Maciburko's concept below and let us know what you think in the comments. 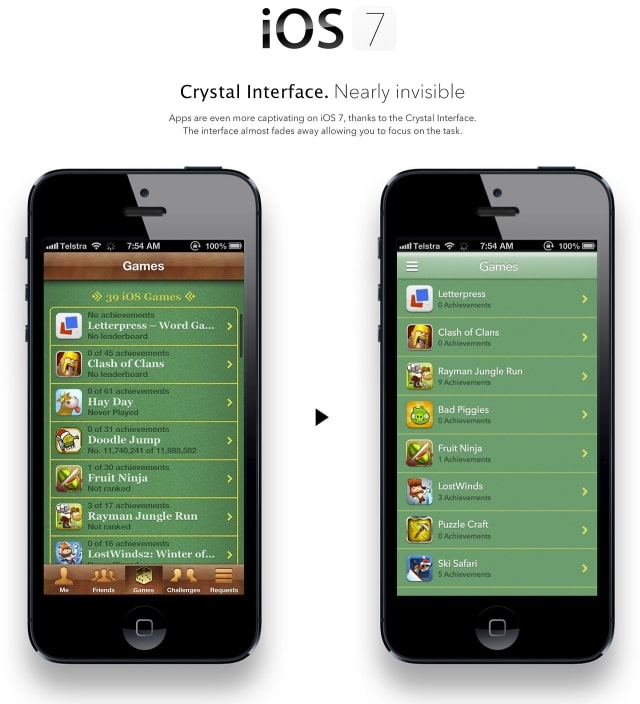 Symen - January 16, 2013 at 5:55pm
hej! didn't knew the facebook app had game center too? c'mon looks pretty but so does the facebook app. its just the same. i bet that if you press that button on the top something like facebook chat will appear... next time? go for something revolutionairy like the mac os x install videos? something cools:P
Reply · Like · Mark as Spam

Xstationbr - January 16, 2013 at 3:04am
I dont like it. I prefer the original, the original seens like more serious interface. And this one is more like Jellybean. Good try but i bet this is not like Apple designers is looking for.
Reply · Like · Mark as Spam

Wow - January 15, 2013 at 10:50pm
Oooh wow, they changed the color and moved the menu to look like android... Wow, so innovative... They must think that they are so important and innovative that they have to tell everyone about it. Make sure they tell everyone the next time they change the font. Because it's so revolutionary.
Reply · Like · Mark as Spam

icla - January 16, 2013 at 2:17am
oooh... aaah... tell us more! Hey buddy, it seems like you don't like reading at all. If you read carefully, wait, actually it's pretty obvious that this is a concept, or fan art. The person behind this is just a regular graphics designer and is not in any way related to Apple Inc. You have a lot of hate towards a company that doesn't even know you. Don't be a tool of your apple hatred. Oooh! after all this is the INTERNET. anyone could post anything. be it something useful or something utterly useless. Just like you did.
Reply · Like · Mark as Spam
12 More Comments
Recent