PDF (DEVONthink only) and text files can be split and merged and PDF pages can be copied and pasted from one document to another. RSS feeds are updated much faster using multi-threading and a new RSS preferences panel allows you to customize how DEVONthink Pro handles RSS feeds. Any document can be easily sent by email directly from within the application and the smart group editor as well as the sidebar have been further completed. The support for file types containing PDF or HTML previews has been improved and a number of scripts and bookmarklets have been updated.

DEVONthink Pro Office now supports QuickLook-based previews in its web interface, shows PDFs also in browsers other than Safari, and divides long item lists into pages for better performance. The Sorter creates web archives also from OmniWeb and Firefox and names documents more reliably. Email archiving is faster, too. Finally, converting databases and exporting files is more reliable now and the overall reliability has been improved.

The version 2.0 upgrade addresses a large number of feature requests from the active user community and modernizes almost every aspect of the applications. These public betas are still incomplete but the already existing functionality is stable enough for sharing with the public. Smart tags, a fully functional sidebar, PDF annotations, enhanced image editing as well as the ability to upload files through the web interface are not implemented yet but will be delivered one after the other with each subsequent update. The user interface of all editions will be further polished, too.

DEVONthink 2.0 imports and displays Microsoft Office (Word, Excel, PowerPoint), OpenOffice and iWork (Pages, Numbers, Keynote) files as well as Skim PDF packages and all other files that support or are supported by Mac OS X 10.5's QuickLook. Using Spotlight importers and plugins for indexing DEVONthink can also search files that it cannot display due to the lack of QuickLook support (Spotlight does not need to be active). Metadata, e.g. from PDF files, email messages, or Office documents is imported, indexed, displayed, and can be selectively searched, e.g. using smart groups.

DEVONthink 2.0 allows to create documents from templates and DEVONthink Pro Office 2.0 shares databases with other users on the local network or over the Internet via an interactive web interface based on the latest web technologies. RSS, RDF and Atom news feeds can be added as self-updating groups to any DEVONthink Pro database and so integrate live content with local documents. The independent 'Sorter' panel lets the user add data to your databases even when DEVONthink Pro is not open. Tabbed browsing and editing as well as Cover Flow simplifies working with large numbers of documents. A PDF sidebar allows rearraging and deleting pages.

The new database engine incorporated into DEVONthink 2.0 not only speeds up working with large databases but also stores all files in their original file format, e.g. Microsoft Word files and email messages. Files are no longer converted when imported and can be edited using external applications. In addition, all documents can be accessed from outside DEVONthink using a standard URL. This highly improves workflow integration with third-party solutions such as iCal, OmniFocus Daylite, Bookends, or Endnote.

DEVONthink Personal 2.0 and DEVONnote 2.0 inherit the three pane view formerly exclusive to the Pro editions as well as separate document windows and the full screen mode. In addition DEVONthink Personal is no longer limited to 10,000 images.

Pricing and Availability:
The public beta releases of DEVONthink Pro and Pro Office 2.0, DEVONthink Personal 2.0, and DEVONnote 2.0 require Mac OS X 10.5 or later and can be downloaded from from their website. DEVONthink and DEVONnote can be test-driven for free for 150 hours of non-continuous runtime until they need to be properly licensed. The public beta releases run without registration until March 31, 2009, before they need to be replaced by new betas or the final 2.0 releases.

Users who purchased DEVONthink Personal, Pro, Pro Office or DEVONnote 1.x on or after July 1, 2008, are eligible for free upgrades. Users who have purchased before the grace period will be able to upgrade for attractive upgrade prices available on the DEVONtechnologies website. 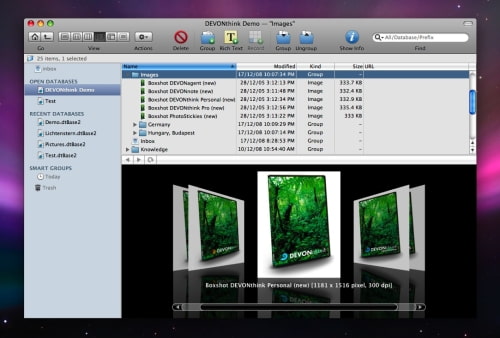