For example, script users now have access to the list of groups as well as a list of cleaners for a group allowing them to custom build a user interface to TextSoap with any Mac OS X scripting language. Enhanced commands also support the cleaning of script text, the contents of the user's clipboard and specified text files. For quick work, script users can easily bring up a palette (with group support) with a single script command.

Take total control of text and its style. Whether it is Mail, AppleWorks, BBEdit, or TextEdit, TextSoap provides integration options such as Services Menu support, Shortcut Menu and Application plug-ins. With a single menu selection TextSoap 6 brings unique processing power to users from within their favorite application.

Pricing and Availability:
TextSoap 6.1 is available now directly from unmarked software. TextSoap 6.1 is a free update to TextSoap 6 users. Pricing for new customers starts at $39.95 (USD). Upgrades from TextSoap 4 and 5 are $24.95 (USD). 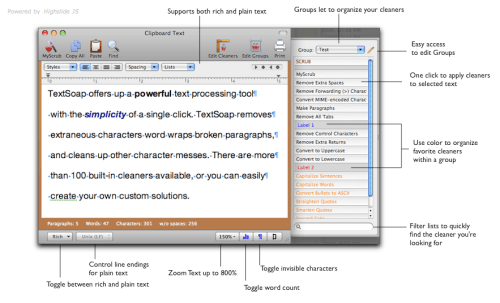