Evasi0n, the jailbreak utility for iOS 7 (including beta 1 and beta 2) is rumored to be patched before the final iOS 7.1 release.

When Apple released iOS 7.1 beta 3 earlier today, many of you were wondering if they had patched evasi0n7. The good news is that Apple has not patched evasion7, according to iH8sn0w -- therefore the jailbreak still works on beta 3. Although evasi0n has not been updated to support beta 3, there are some unofficial builds floating around that do support it.

While Apple has not patched the exploits evasi0n7 uses in 7.1 beta 3, it is likely that by the final release (rumored for March), they will indeed fix the vulnerabilities therefore making evasi0n7 incompatible with iOS 7.1 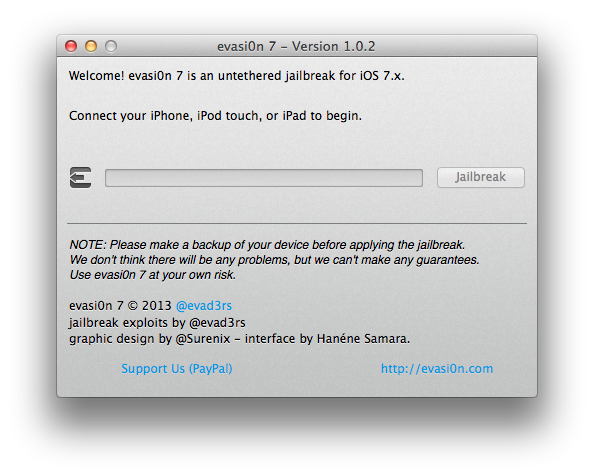 kalababa - January 9, 2014 at 4:46am
This is totally crap. My iPhone 5 was 6.0.1. I update it 7.0 as tutoril says. After done that when I ready for JB on the top of evassi0n box says it will work with 6.0 to 6.0.2! What is that. Still I try it says I have to go to setting then I need to remove passcode, which I don't have any passcode. How fun is that? So I am stuck with this pis of shit. What should I do now anybody got any idea for me? I have a request for everybody please please don't do anything by the stupid idea of iClirify.
Reply · Like · Mark as Spam

Skyevader - January 8, 2014 at 6:30pm
Mate. Ifile and all other apps work fine for me on my 4s running 704. Like back in iOS 5 & 6 jailbreak was released and pat by Apple. So why not count ur blessings for wAtt u get for free. Great work Evaders Ps. The only thing I don't quite understand is this Taig thing people r talking about?? Was the Chinese break not released with Cydia or the option to install it?? Confused.
Reply · Like · Mark as Spam