Saurik has released an iOS 8 compatible version of Cydia for manual download following the release of an untethered Pangu jailbreak for iOS 8 - iOS 8.1.

I've given a new version of Cydia Installer in the form of a standard jailbreak bootstrap for inclusion in a new version of their jailbreak. I've also pushed the .deb of the iOS 8 version of Cydia to apt.saurik.com for manual download, but not yet to my repository. A lot of thanks goes out to limneos, who tested the new build for me, as I was at an airport (and now am frantically typing this message while they figure out how to retract the jetbridge from the plane I'm on that is about to take off).

The Pangu8 jailbreak was released for Windows only, without a compatible version of Cydia. You can download the jailbreak from here.

Now that the compatible Cydia deb has been released you can download it from here: http://apt.saurik.com/debs/cydia_1.1.13 ... os-arm.deb.

To install the new version of Cydia you will also need cydia-lproj which you can get from here: http://apt.saurik.com/debs/cydia-lproj_ ... os-arm.deb

Advanced users can then SSH into their iDevice, copy over the files, and issue the following commands to install Cydia.

It's likely that the Pangu8 jailbreak utility will be updated to include Cydia very shortly. If it's not, we may post a detailed tutorial to help those who aren't familiar with SSH. 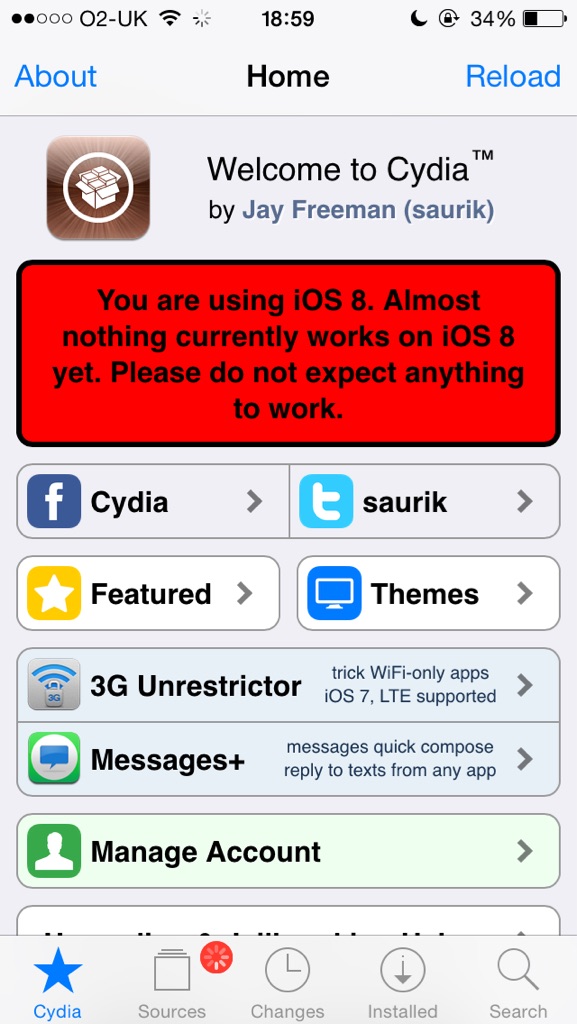 Lilly Quintana - October 25, 2014 at 1:00am
competed the whole process after rebooting the cydia icon is not there not sure what I'm doing wrong? Jailbroke it opened Pangu downloaded SSH, copied files to command on Winscp n rebooted and nothing! Someone Help Me Please
Reply · Like · Mark as Spam

BrunoTurek - October 25, 2014 at 11:12am
Well, I had the same problem and saved myself by doing this: Do what iClarified said Open the Pangu app, goto manager then remove. Click on the trash next to Pangu and yes While it is doing it's job press the home button wait 5 secs go back to Pangu app and click force remove. Respring Open Cydia Enjoy
Reply · Like · Mark as Spam
43 More Comments
Recent