Instead of using the Mini DisplayPort, which Thunderbolt has used since it was first introduced, Thunderbolt 3 is moving to a USB Type-C connector, which Apple introduced with its new MacBook. As a result, we will likely see USB Type-C make its way to the entire MacBook lineup throughout the next few years.

Thunderbolt 3 also brings many other changes besides the new connector, including 40Gbps max bandwidth (double the previous generation) and delivery of up to 100W of power for charing devices, or 15W of power without USB PD. With support for USB 3.1, DisplayPort 1.2, and PCIe 3.0, Thunderbolt 3 supports more protocols than any other I/O controller.

With the increase in bandwidth, Thunderbolt 3 can now support dual 4K displays @ 60Hz, or one single 5K display at 60Hz with just one cable. Most current manufacturers sell 4k/5k displays with dual cable setups since the current Thunderbolt 2 spec cannot provide enough bandwidth.

Intel will maintain compatibility with existing Thunderbolt 2 devices with a separate adapter. The first Thunderbolt 3 devices will ship "before the end of the year." 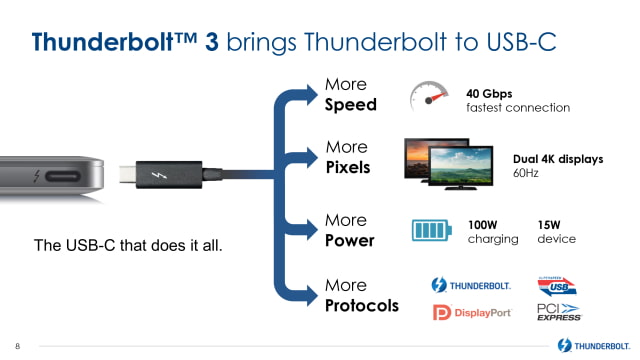