YouTube is accusing T-Mobile of interfering with its video traffic and delivering media to users at a lower quality, reports the WSJ.

T-Mobile recently launched its Binge On program that delivers video at a lower quality in exchange for waiving data fees. However, it appears that the company is doing the same for all sites including those that aren't part of the program.

YouTube, which is owned by Alphabet Inc., said T-Mobile is effectively throttling, or degrading, its traffic. “Reducing data charges can be good for users, but it doesn’t justify throttling all video services, especially without explicit user consent,” a YouTube spokesman said.

T-Mobile declined to comment on the accusation but said its customers “love having free streaming video that never hits their data bucket” and like “both the quality of their video experience and the complete control they have.”

The Internet Association has corroborated YouTube's report saying that T-Mobile’s new practice “appears to involve throttling of all video traffic, across all data plans, regardless of network congestion.”

Recently the FCC adopted net neutrality rules which are supposed to ensure that Internet providers to discriminate against traffic from a specific source. The FCC already took took notice of Binge On and similar services and has sent letters to T-Mobile, AT&T, and Comcast to question them about their respective services.

T-Mobile argues that the program is within regulations, open to all video providers, and can be turned off. 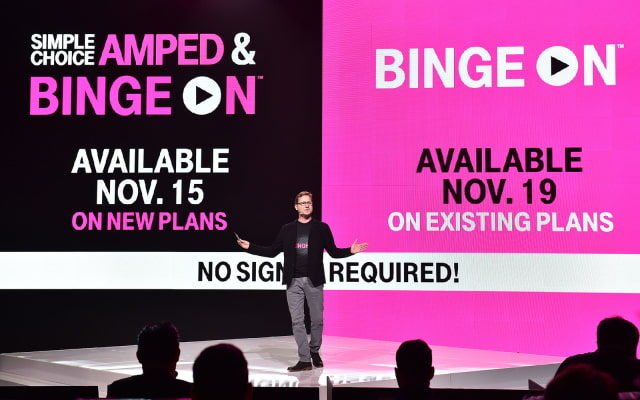 MannyG - December 27, 2015 at 10:34pm
Another thing that needs to be turned off. Lolol. Apple wants us to degrade our phones to save very little battery power. Now T-Mobile wants us to turn Binge off. Hahaha. Halarious!
Reply · Like · Mark as Spam

T-Mobile Employee - December 24, 2015 at 2:23am
This is an optional feature and anyone can call and remove the feature as easy as that. The idea behind the feature is to allow you to stream these movies only using 1/3 of your data but also help with network congestion in areas where the data traffic is at high volumes. If you are watching the video from your phone you will never notice a difference , on the other hand if you are tethering your phone to a big screen TV you will notice a difference. Like I said if you don't want the feature just call them and they will remove it, but it's great to have if you don't want your data being eaten like crazy from these HD/4K movies that your just simply watching on your smartphone's small screen.
Reply · Like · Mark as Spam
1

The Truth - December 24, 2015 at 1:33am
There is no way T-Mobile can keep low prices and make a profit without cutting corners.
Reply · Like · Mark as Spam
Recent