The U.S. Supreme Court has refused to hear Apple's appeal of a ruling that it conspired to fix the price of eBooks, meaning the company will have to pay a $450 million settlement.

Reuters reports that the court's decision not to hear the case will leave in place a June 2015 ruling by the 2nd U.S. Circuit Court of Appeals that found Apple guilty of conspiring to fix e-book prices.

Apple, in its petition asking the high court to hear the case, said the June decision by the 2nd U.S. Circuit Court of Appeals in New York upholding a judge's ruling that Apple had conspired with the publishers contradicted Supreme Court precedent and would "chill innovation and risk-taking."

The agreement Apple reached with the U.S. Department of Justice has it paying $400 million to e-book consumers, $20 million to the states, and $30 million in legal fees. 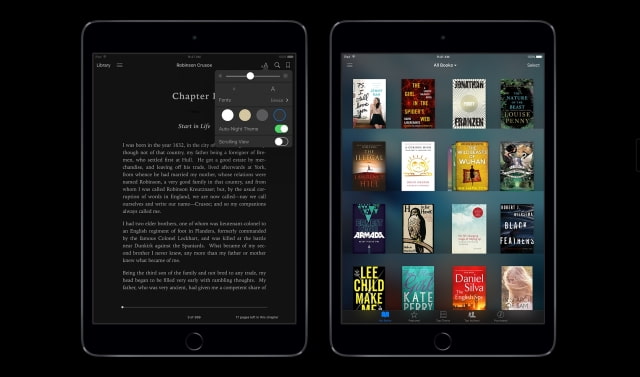 iAmMe - March 9, 2016 at 1:59pm
Do who's the terrorist now? The government is now terrorizing those who don't give them what they want.
Reply · Like · Mark as Spam

Seinfeld - March 8, 2016 at 3:21am
And this is just the beginning of the end for Apple, Justice had been served nicely...that's what happens when you don't let the FBI go in your back door Tim Cook
Reply · Like · Mark as Spam

Sighfilled - March 8, 2016 at 4:46am
More like a downfall of your brain cells after overprocessing this article. End of Apple my ass! Hell just imagine a world without them and see how it's possible any company will handle it without them... *cricket noises* exactly my point! Apple has faced this before even if it meant paying more than this! Keep in mind they're one of the most valuable and top ranked global brands of all f••kin time. The lying company called, they want your myth back!
Reply · Like · Mark as Spam

BobbySorloss - March 7, 2016 at 5:03pm
Let me tell you something people, Apple was caught red handed, they made their case in Court multiple times, even appealed and now wanted the Supreme Court to hear them again because they don't liked what they got. The other conspirers admitted and settled..... What else do you want.... And let me say, you in the United States have it really much better than others with their Governments.....besides... 30 million in legal fees? Nice lawyers you have... They look like never lose....
Reply · Like · Mark as Spam

Kornmehl - March 7, 2016 at 7:51pm
Apple could not have been caught redhanded, because they weren't doing anything wrong. Get your facts straight before commenting from overseas
Reply · Like · Mark as Spam
5 More Comments
Recent