iOS 9.3 is Apple's most stable new release in years, according to a report from Apteligent. That's despite a bug that affected opening web links which was fixed today and an activation bug that could lock users out of their device.

Despite this bug, iOS 9.3 stands as Apple’s most stable new release in years. The average crash rate over the past eight days is 2.2%, by far the most stable iOS version. For the sake of comparison, that’s better than any current Android release, including the most recent Android Marshmallow, which stands at 2.6%.

Check out the chart below which shows the crash rate for various version of iOS over the past month. Have you noticed improved stability with iOS 9.3? Let us know in the comments! 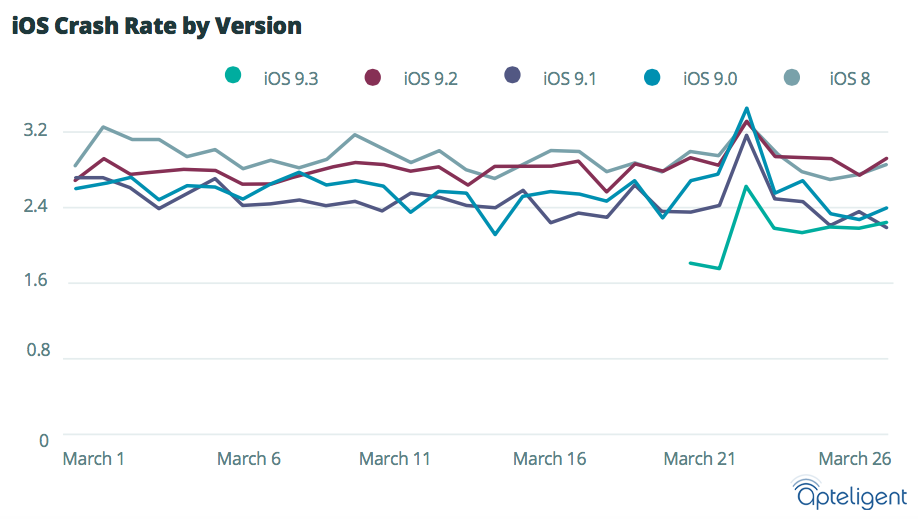 Rahul Kotian - April 1, 2016 at 9:59pm
Need improvement in iOS 9.3, Night shift is good but it should have worked when low battery mode is turned on.
Reply · Like · Mark as Spam

MannyG - April 1, 2016 at 3:38am
It is? My phone keeps freezing and even the home button doesn't work when it happens. I keep seeing the apple logo for a couple seconds and then I can use it again. Not too stable. Also my battery just drains much more quickly!
Reply · Like · Mark as Spam
13 More Comments
Recent