Samsung is looking for new customers after Apple slashed iPhone X production leaving it with excess OLED capacity, according to Nikkei. Production of the iPhone X is expected to drop by half in the first three months of this year from an initial estimate of over 40 million units.

Having ramped up production capacity to meet demand for the latest iPhone, the first model to incorporate the panels, Samsung is now saddled with excess production capacity. Other smartphone makers, who Samsung had hoped would incorporate OLED panels, have been slow to make the transition due to their expense and are sticking to liquid crystal displays.

Display Supply Chain Consultants estimates Samsung's OLED panel factories have a utilization rate of around 50-60% due to sluggish demand. Given the overcapacity, "the price of rigid-type panels on glass substrates has been falling," said Yoshio Tamura, head of DSCC's Asian operations.

Global production capacity for OLED panels is expected to double by 2020 and it's likely that Samsung's massive 95% market share will be significantly reduced. 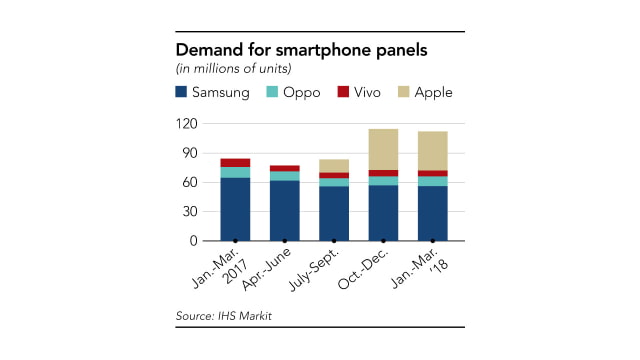 Jobijoba - February 19, 2018 at 3:39am
I do love my iPhone X too!! I tend to look at other Iphone and think they look ugly with the bar at the bottom and top. Plus, i am not missing the home button at all. Only issue is that I get a bit confused while going from the iPhone X to my iPad....
Reply · Like · Mark as Spam

D4xM4Nx - February 19, 2018 at 3:10am
I for starters adore my iPhone X!! Such a fantastic pack of tech beautifully put together, completely satisfied. As for Samsung, karma reaches everyone. They found it funny to charge a premium for their OLED screens, now who's laughing lmao.
Reply · Like · Mark as Spam