Apple has released iOS 12.1 beta to developers for testing. The build number is 16B5059d.

The new beta likely contains bug fixes and improvements from iOS 12.0. It also brings back the much anticipated Group FaceTime feature which was delayed from the initial release of iOS 12.0. 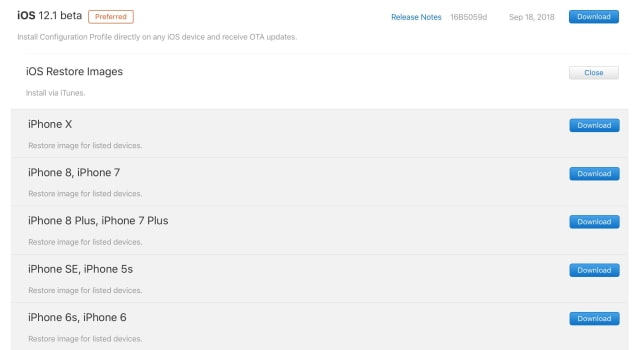 alinboy - September 18, 2018 at 6:06pm
Please apple add back into facetime the flip camera when you touch the small image now is not same anymore we need it to go into 3 dots to change everything is a bomber, don’t like it!
Reply · Like · Mark as Spam

alinboy - September 18, 2018 at 5:57pm
Many bug at iPhone 7 ios 12.. Bluetooth logo not showing! Icons they are flickering:( Icons name was showing this morning cleaning ? Airpods one of headphone like left was dead no respond at all not showing into notification just right and case right was showing full charged! I did many things unpair, pair again on/off all that! Start to working again but I don’t know for how long! Weather into notification bug showing different country after restart the privacy and location now is all good!
Reply · Like · Mark as Spam
Recent