Teehan+Lax has posted an update on Element, a lockscreen cydget being developed by Saurik.

Element was originally designed by Teehan+Lax as a replacement homescreen for the iPhone. Since then the project has progressed into a lockscreen Cydget and is being coded by Saurik, the creator of Cydia.

Here is the update as posted by Teehan+Lax...

-----
Some background. We never had any intention of actually building it until Saurik, the creator of Cydia, gave us a call and told us he wanted to build it for us on a new platform he’d created called Cydget. Needless to say we got pretty excited about the fact the lock screen would soon be a reality. He figured it would only take a week or two to actually build. It wasn’t long after that we began to see some pretty serious set-backs. The first of which being that he got very ill and had to put the project aside until he recovered. Thankfully he’s okay but that set us back well over a month.

We eventually got word that he was still developing it but had to tweak the framework to which it was being built on. A few more weeks passed. It was on December 9 when we last officially heard on its status. He had everything working but SMS and weather but wasn’t quite ready to show us a package yet. Since then the only thing we’ve been able to find out is from his twitter account on December 24. It stated that he now had everything functioning except weather and that he was working on optimizing it. That takes us to today.

We aren’t holding back info or trying to mislead people. The simple fact is that everything is in Saurik’s hands and he is working on his own timetable. Saurik will let everyone, including us, know when it’s ready but at this point we have no idea when, or if, that will be.
-----

In the meanwhile if you would like to customize your iPhone lockscreen you can check out LockInfo. 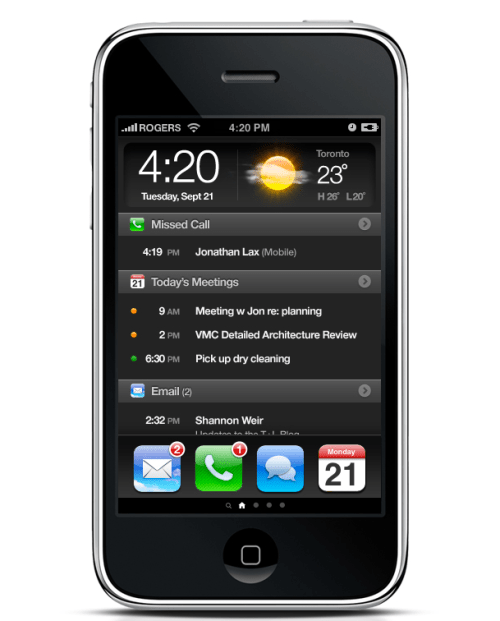 Babylonia - January 14, 2010 at 4:34pm
I didnt write the take that back comment below. Intelliscreen does the same thing and more.
Reply · Like · Mark as Spam

Nathaniel - January 12, 2010 at 2:04pm
How can you know if something does better than an uncompleted unreleased utility?
Reply · Like · Mark as Spam
Recent