Check out this leaked video that shows the setup and operation of an Apple Maps vehicle.

Apple uses modified Subaru Impreza vehicles known as 'Ulysses' to capture data and 3D images for its Maps application. The vehicle is outfitted with roof mounted tower housing high-resolution cameras and LiDAR scanners. The tower can be raised and lowered as needed.

In the trunk is a 2013 Mac Pro that processes captured data in real-time. Data is saved on 4 SSDs that are 4TB each. It takes about a week to fill up all four.

The entire system is controlled by EyeDrive, a modified iPad running the EyeDrive app. In order to prevent interference with the LiDAR sensors, teams start out in the morning when the sun is at 30 degrees and drive until it comes back down to 30 degrees. The EyeDrive app tells the team where to drive to and lets the operator check images in real-time to confirm a successful capture.

Take a look at the video below while its still available! 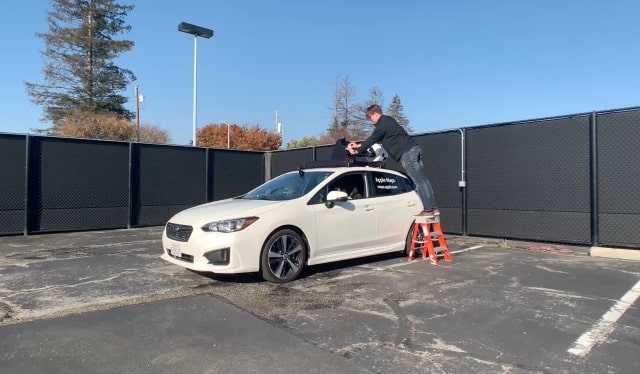