Despite its announcement that users would be able to stay on iOS 14 instead of upgrading to iOS 15, Apple now says this option was only temporary.

Apple told Ars that it always intended the iOS 14 security update option to be temporary. Essentially, people could have a short grace period while Apple worked out the worst of the new operating system's early bugs, but you would always eventually have to upgrade to stay patched.

iOS may now offer a choice between two software update versions in the Settings app. You can update to the latest version of iOS 15 as soon as it’s released for the latest features and most complete set of security updates. Or continue on iOS 14 and still get important security updates.

However, Apple points to a support document published in September 2021 that says iOS 14 would get software updates for a "period of time".

"This option allows you to choose between updating to the latest version of iOS or iPadOS 15 as soon as it's released, or continuing on iOS or iPadOS 14 while still getting important security updates for a period of time."

It appears that period of time is over, Apple has confirmed that iOS 14 is no longer being updated. If you want the latest security updates, you'll have to update to iOS 15. The latest release is iOS 15.2.1. 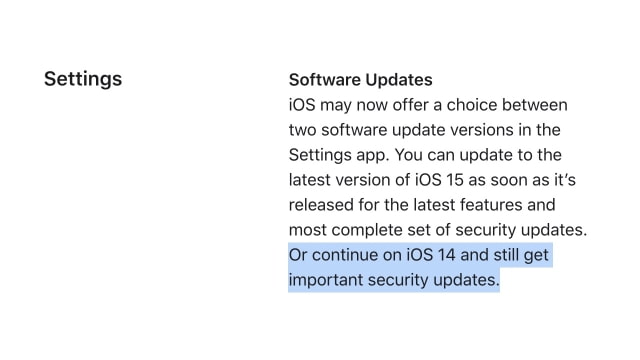