Padgadget has completed a series of follow up tests on the iPad's Wi-Fi performance after upgrading to the 3.2.1 firmware.

They tested both the iPad Wi-Fi only and the iPad 3G using a series of six tests at different distances and with varying interference.

In order to keep things simple, we focused on speed. The test is a mix of content download as well as raw http performance tests via speedtest.net, repeated 10 times for each test, and averaged out (normalized to a scale going from 0 to 100, 100 representing the best throughput we could measure).

Their results show a performance improvement of at least 20% using the 3.2.1 firmware. Take a look at the chart below... 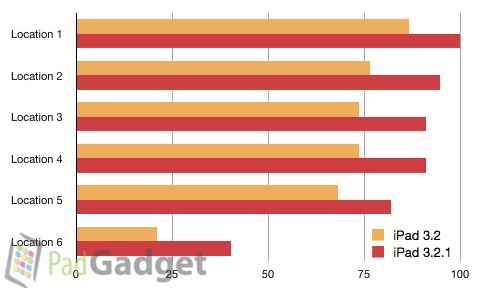 ipwn - July 18, 2010 at 9:00pm
after 2nd reading, why is this test based on speed? wtf!? what iPad need is more range(wireless signal strength) not the freaking speed! they dont show the signal strength test! this is soooo FAKE! and Apple approve this? must be their marketing/damage control over antenna shits.
Reply · Like · Mark as Spam