Notebook sales saw negative growth in August for the first time ever following the release of the iPad, according to FORTUNE.

Morgan Stanley's Katy Huberty issued a report to clients graphing decline of the notebook sales growth over the past year. She says, "tablet cannibalization" is at least partially responsible and cites the following reasons:

● NPD data shows that after six months of decelerating growth, U.S. retail notebook unit growth fell 4% year over year in August, marking the first time those numbers had actually gone negative.
● First week of September shows that units fell 4% year over year again.
● BestBuy CEO Brian Dunn's remarked that "internal estimates showed that the iPad had cannibalized sales from laptop PCs by as much as 50 percent."

Take a look at the chart below to see the decline. 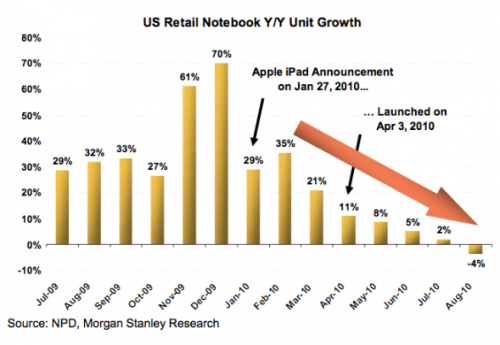