Steve Jobs has responded to email from a concerned developer after Apple announced it would cease future development of their version of Java for the Mac.

Java Deprecation
As of the release of Java for Mac OS X 10.6 Update 3, the Java runtime ported by Apple and that ships with Mac OS X is deprecated. Developers should not rely on the Apple-supplied Java runtime being present in future versions of Mac OS X.

The Java runtime shipping in Mac OS X 10.6 Snow Leopard, and Mac OS X 10.5 Leopard, will continue to be supported and maintained through the standard support cycles of those products.

I am the CTO and founder of a Software company based in Philadelphia. We create and sell Enterprise software into the health care space.

Our software is Java based, and runs on both the server and the desktop. We have been in business for over 12 years now, and are a healthy growing company with about 180 employees.

I am a big Apple customer, as is my company. We love developing and testing Java based software on OS X.

I am hoping you would consider commenting either to me or via your PR channels what are the future plans for the Java programming language and platform on OS X?

One last note - a growing trend over the last few years at all the software conferences I attend is the popularity of the Macbook laptops. Go to any non-Microsoft focused developers conference and the rooms are typically dominated by Mac laptops. One major reason for this is that OS X is a great platform for Java developers.

Sun (now Oracle) supplies Java for all other platforms. They have their own release schedules, which are almost always different than ours, so the Java we ship is always a version behind. This may not be the best way to do it.

Sent from my iPhone


Jobs' reply indicates that Apple is hoping Oracle will supply Java for Mac; however, there is no indication of any agreement in place and Oracle has yet to step up to the plate publicly and announce they will offer Java for Mac alongside their other platform releases. 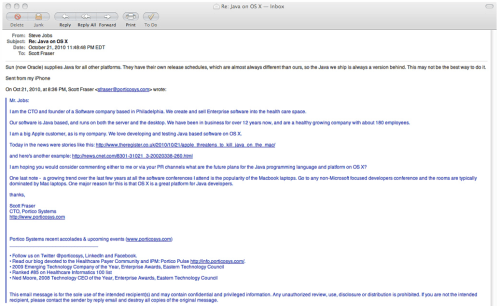 Khan - October 22, 2010 at 11:51am
I am happy to hear this. From now we dont have to depend on Apple to provide updates for Java. we can go to Oracle and get it. It has been always an issue with Apple when they provide java and it is always old version.
Reply · Like · Mark as Spam

Benjamin - October 22, 2010 at 7:51pm
Or we could have nothing because oracle may not want to pick up the slack...in that case we may be missing out on a lot of programming and content... which is looking like apple\'s goal more and more.... its a frightening thought.
Reply · Like · Mark as Spam
Recent