In a situation similar to its altercation with fring, Skype claims Nimbuzz is violating their API Terms of Use and End User Licence Agreement.

Said Evert Jaap Lugt, CEO of Nimbuzz:
Skype's decision is unfair to its own and our users. People want to choose how they communicate and to be able to make calls and send messages, regardless of service, social network, device or operator network. Nimbuzz gives them the freedom to do so, Skype does not.

Skype responded with this statement:
"Skype has been in discussions with Nimbuzz regarding our concern and belief they were using Skype's software in ways which it was not designed for, in a breach of our API Terms of Use and End User Licence Agreement.

Skype offered to meet Nimbuzz and discuss the issue however we have not heard back from them since our last correspondence to them in early August. As we have said before, Skype encourages openness and supports developers to build products that work with the Skype platform."

It's thought that Skype may be moving to block all third party apps before its IPO or perhaps that they are blocking all applications that have started offering their own paid VoIP services. 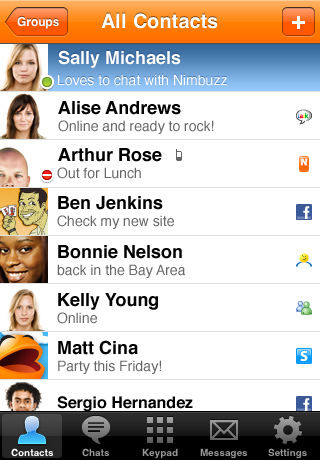