Leaked screenshots confirm the launch of the ZTE Peel, a case to turn your iPod touch into a phone. Sprint plans to launch the device on November 14th, according to BGR.

The ZTE Peel will indeed be hitting the Now Network on November 14th and will retail for $79.99. The plan that Sprint will provide Peel customers is a $29.99, month-to-month, offering that will include a 1GB data allowance; overages will be billed at $0.05 per megabyte. The Wi-Fi case will be able to provide internet access for up to two devices and supports second and third generation iPod touch devices.

It's unclear if Sprint plans to launch a different version of the case for the 4G iPod touch. 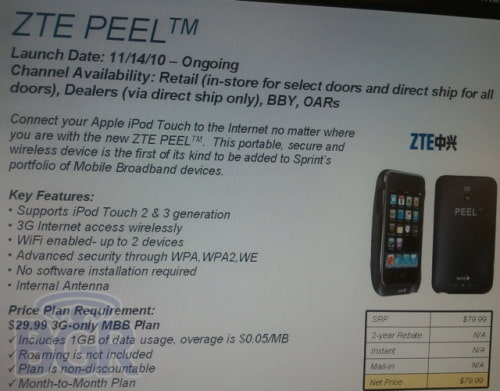