Apple today announced that movies from major film studios including 20th Century Fox, The Walt Disney Studios, Paramount Pictures, Warner Bros. Entertainment, Metro-Goldwyn-Mayer Studios Inc. (MGM), Sony Pictures Television International and Lionsgate UK are now available on the iTunes® Store in the UK (www.apple.com/uk/itunes). Movie purchases and rentals feature iTunes’ legendary ease of use, which makes discovering and enjoying movies as simple and easy as buying music on iTunes has always been. The iTunes Store in the UK features over 700 films available for rent or purchase, with titles available for purchase on the same day as their DVD release, including favorites such as “Hitman,” “I Am Legend,” “National Treasure 2: Book of Secrets” and “Into the Wild.” iTunes Movie Rentals also features over 100 titles available in stunning high definition, perfect for viewing on a widescreen TV with Apple TV®. 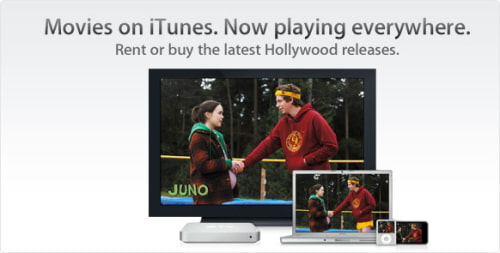 “We’re kicking off movies on the iTunes Store in the UK with over 700 films for purchase and rent,” said Eddy Cue, Apple’s vice president of iTunes. “We think customers in the UK are going to love being able to enjoy their favorite movies on their iPod, iPhone or on a widescreen TV with Apple TV.”

Pricing & Availability
Movie purchases and rentals from the iTunes Store for Mac or Windows require iTunes 7.6.2, available as a free download from www.apple.com/uk/itunes/. iTunes movie purchases and rentals require a valid credit card with a billing address in the United Kingdom. iTunes movies are available at £6.99 for library title purchases and £10.99 for new releases. iTunes Movie Rentals are £2.49 for library title rentals and £3.49 for new releases, and high definition versions are priced at just one pound more. Movie rentals can be previewed, purchased and watched on iPod classic, iPod nano with video, iPod touch, iPhone and on a widescreen TV with Apple TV.
Follow iClarified
Add Comment
Would you like to be notified when someone replies or adds a new comment?
Yes (All Threads)
Yes (This Thread Only)
No
Comments
You must login or register to add a comment...
Add Comment
Recent