Apple is reportedly testing three iPhone 5 prototypes, one of which has a slideout keyboard, according to Apple.pro.

The site also details another model that looks similar to the iPhone 4 and features a more powerful battery and improved camera.

The other one is for the foundation is now iPhone4
The hardware specifications to enhance
More powerful battery
Behind the footage of the supplier or large grain of light-based
current eight million and 12 million lenses supply prices nearly
So iPhone5 will use 800W or 1200W lens do?
If you take out the lens with 1200W file will eat up a lot of space too large for that
image file you upload video to the FB will be crazy like a cloud it
Therefore, under consideration or in business and 800 million tend to like (better than the current 500 million)

Unfortunately, the Google translation is quite poor. If anyone can provide a better one please let us know. Apple.pro has a pretty good track record when it comes to Apple rumors. They produced photos of the iPod nano touchscreen, the white iPhone 4 cover and battery, and the MacBook Pro redesign before their release.

The report also reiterates reports of a thinner iPad 2 with a built-in camera. 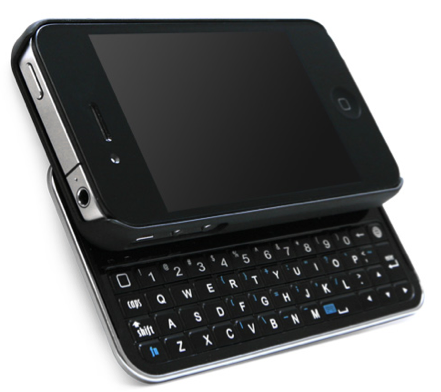 Reddy - February 15, 2011 at 11:21pm
This is all fake pictures and these rumours are just to add some shit to iclarified. Steve is against button for iPhone and I think apple iPhone has made special identity by having very less buttons.
Reply · Like · Mark as Spam

Brazilian_Boy - February 15, 2011 at 8:02am
This is not a prototype... it\'s a worldwide sold accessory to the iphone 4. http://www.boxwave.com/products/keyboardbuddycase/apple-iphone-4-keyboard-buddy-case_3968.htm Fake hype...
Reply · Like · Mark as Spam

teraflow - February 15, 2011 at 3:43am
Think about this... they are working on multitouch gestures in order to get rid of the home button, why would they work in an iPhone with slideout keyboard? I like on screen keyboard, plus a slideout keyboard would make an iPhone like twice as thick.
Reply · Like · Mark as Spam
6 More Comments
Recent