Apple has dropped from third to fourth in Canalys' market share analysis for Q1 2011. The data collected includes tablets and puts Apple behind HP, Acer, and Dell.

During the first quarter of this year, pad shipments reached 6.4 million units worldwide. Apple accounted for 74% of these shipments, while other vendors struggled to bring competitive products to market. Canalys expects that next quarter will see a significant change in the market, with products appearing from Acer, Asus, LG and RIM.

"Taking into consideration the iPad's 'halo effect’' on the company’s other products, Apple has grown considerably in most markets worldwide," said Canalys Analyst Tim Coulling. "As the iPad 2 and its competitors continue to roll out, we expect pad sales to propel PC market growth for the rest of the year." 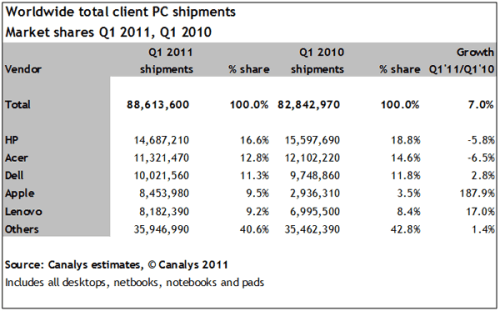 Sabtain - April 28, 2011 at 8:23pm
Apple is still a budding company with fewer products than The rest yet still in top 10 another product release will surely put apple waay up again
Reply · Like · Mark as Spam