Apple has been awarded the patent for an unreleased iPad design which features a landscape dock connector, according to Patently Apple. Before the iPad's original release it was rumored that the device would include two connectors; however, that rumor never materialized.

Apple has been granted a design patent for what appears to be the original iPad Wi-Fi + 3G model that just happened to have a second landscape Apple Connector slot as is clearly noted below in patent figures 1 and 6. It's unknown at this time as to why Apple decided to scrap the secondary Landscape Apple Connector slot – when consumers clearly wanted such an option. Of course Apple could always decide to reinstate the Apple Connector slot in a future version of the iPad or simply shift to wireless charging which would eliminate the need for such a port in the first place. The latter is likely the reason for scrapping it. 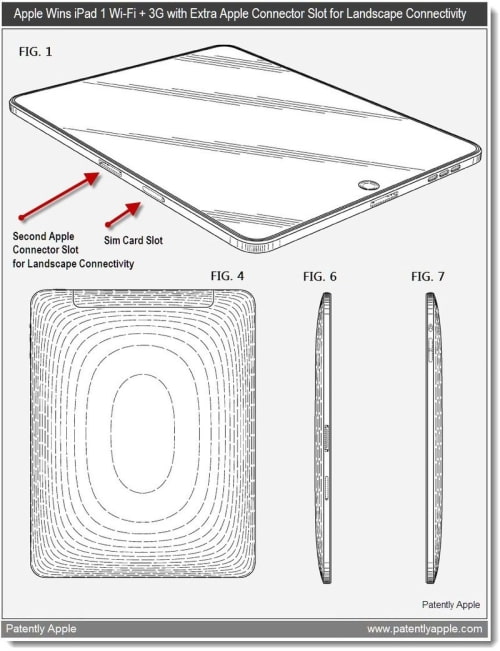 DacksMac - May 11, 2011 at 9:58am
Yeah and I bet the USPTO office in DC had to open a whole department just for Apple. Holy crap, new patents everyday. Their intellectual property attorneys are most likely making $500-1000 per hour. Lucky devils
Reply · Like · Mark as Spam

Coose - May 11, 2011 at 9:42am
\'common. How can you patent a connector position on a device. These patents are getting ridiculous. Sounds like there some kickback $$ being passed around here. Someone in the patent office is getting a sore back from all that $$ sitting in his pocket.
Reply · Like · Mark as Spam