A new Apple patent filing shows images of an iPod nano with a camera menus as well as new 'chameleon-like' screen savers, according to Patently Apple. The filing details the iPod nano as a fashion accessory with a new dynamic screen saver system that could sense the environment it is in and in a chameleon-like fashion automatically change the screen saver accordingly.

According to Apple's patent, a user will be able to select camera option 1014 to define the tag characteristic associated with the images captured by the camera. In the example of FIG. 10, the camera output is associated with the color palette of the entire tag. In some embodiments, the user will be able to further define the specific correlation between captured images and the color palette (e.g., by selecting option 1012). In some embodiments, a particular sensor may have a limited number of tag characteristics with which it could be associated. For example, a camera may be limited to color related tag characteristics. Option 1014 could therefore restrict the available characteristics that the user could select for the camera output.

Rumors of iPod nano with a camera were again mentioned this week with Apple.pro posted a photo of the supposed device. 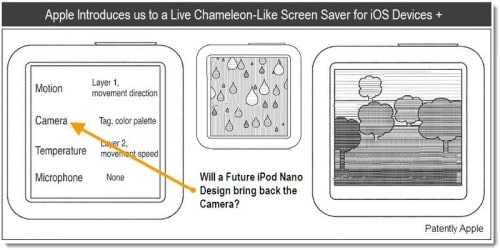